Durant doing well in all facets of the game 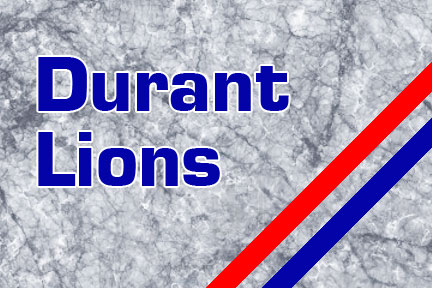 The Durant Lady Lions are coming off an appearance in the state tournament in 2014, and they are carrying that momentum into a possible return there this season.

Durant is now 12-1 on the year after two wins over Edison on Monday.

“We’re pitching it well, hitting the heck out of it in the last couple of weeks and playing really good defense,” Mullens said. “And those are the three facets of the game you’ve got to do.”

Durant is carrying a nine-game winning streak and have given up only nine runs through that stretch. Mullens praised the production he is getting in the circle.

“Kylie’s playing really well right now. She’s kind of banged up a little bit with her arm. Her elbow has been hurting her. So we’ve been watching her pitch count. I’m trying to limit her to about 75 or 80 a game.

“It’s always nice to have Sydney there as a backup plan to always be able to go to her to finish games out. She did a good job this weekend.”

The Lady Lions have scored 100 runs over those nine games, and it could have been more if Mullens hadn’t called off the dogs (or Lions) against Millwood.

Mullens had an interesting analogy for the way his girls have been hitting.

“Our one through six is like Murderers’ Row back in the late 20’s for the Yankees. It’s really good.

“Destinee (Lewis) and Macy (Powell) are driving in a lot of runs for us. And then you’ve got Haley (Morgan) and Sydney at the top. But then our eight and nine are rolling it over back to the top of the lineup again.

Durant continues to roll through the schedule, but Mullens said the team’s overall record isn’t the most pressing thing right now.

“The important thing in 5A and 6A is that wins and losses don’t matter as much,” Mullens said. “It’s the district play. And in order to host (in the playoffs), we have to win those district games. And you know the old cliche, we’re going to take one game at a time.”

One of those games, though, is circled on the calendar for Mullens’ group.

“We have a big one coming up on Sept. 10 against Piedmont.

“The girl coming in is the Coach Rick Scott’s daughter. She’s going to Texas Tech and she throws mid-60’s. Their record (8-7) doesn’t indicate what they really are right now. But the games that she’s throwing, you can look at the scoreboard and tell when she threw and when she didn’t. She’s really good.

“It’s going to be a dogfight and we’ve got to get one of those first two spots in the district so we can stay here and host because we play really, really well at home.”

Durant has lost only five games at home in the past three years.

The Lady Lions have a few more games on the slate before Sept. 10, including a doubleheader at Tulsa Memorial on Thursday.

Neither Durant nor Piedmont has a loss so far in District 5A-4. That will change a week from Thursday.

But in the mean time, as Mullens said, it is just one game at a time. And for nine straight, that game has meant a win for Durant.