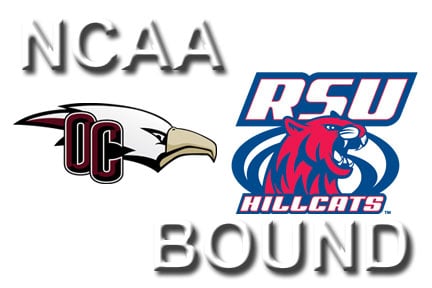 A new age dawned today for the Eagles and the Hillcats.

Oklahoma Christian and Rogers State received the news today that they had been accepted into the three-year transition process toward full membership in the NCAA’s Division II.

“We are honored that the NCAA has allowed us to pursue membership,” said Curtis Janz, OC athletic director.  “Oklahoma Christian is proud and excited to be associated with an organization like the NCAA that stands for excellence, competitive equality and diversity.  We see this as a new beginning and a chance to establish new, great athletic traditions.”

Both schools will be starting the first year of candidacy and both will be moving into the Division II’s Heartland Conference.

“We are thrilled with the committee’s decision and anxious to begin the NCAA membership process,” Bradley said.  “We believe RSU is a great fit for NCAA Division II and we look forward to establishing new rivalries and traditions with many of our peer institutions in the region.”

Both schools had fantastic athletic seasons on their way out.  The Hillcats had a national runner-up finish in baseball and both the women’s and men’s basketball teams made it to the Elite Eight.
Oklahoma Christian won the men’s cross country national championship, Eagle Silas Kisorlo finished second in the nation with his individual cross country run and the Eagles’ men’s golf team were national runners-up.