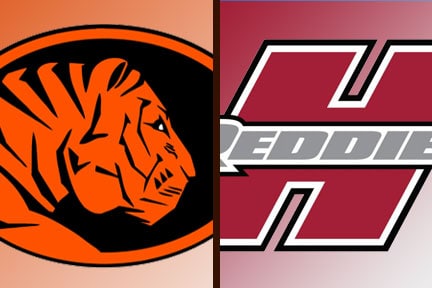 Arkadelphia, Ark. – For the first time since Oct. 4, 1986, the East Central University football team came out of a game against Henderson State with a 35-28 come-from-behind victory at Ruggles Field at Carpenter-Haygood Stadium.

“What a great team win for us,” said head coach Tim McCarty. “We fought a good team for 60 minutes and got a huge road win. I am very proud of our players and coaches effort tonight.”

At the start of the third quarter, the Tigers got the ball first and took their opening possession into the end zone to force a 28-all tie, with 9:14 left in the stanza. Senior Rocky Moore connected with juniorDavid Moore for a 12-yard pass that capped off an 11-play, 72-yard drive.

The score remained knotted at 28 until 3:15 remained in the fourth quarter and Rocky Moore connected with senior Nathan Pickett for an 11-yard TD pass to give ECU the lead.

The Reddies (1-1, 1-1 GAC) had one more chance to tie the game, but after getting all the way down to the four-yard line and 11 seconds remained, the Tigers forced a 17-yard loss with a sack of quarterback Dallas Hardison and HSU didn’t have enough time left on the clock to get off another play.

Junior De’Shawn Jones scored the final TD of the game on one of his four rushes. Senior Jamal Hall led the rushing core with 18 attempts for 56 yards.

The Reddies were the first to get on the scoreboard, earning a touchdown in the first 1:45 on their first possession for a 0-7 lead.

ECU quickly tied the game on its first possession of the game with a 16-yard Rocky Moore to David Moore pass with 8:55 left in the first quarter.

HSU scored on its next two possessions to take a 7-21 advantage before the end of the first quarter.

The Tigers cut the deficit in half with 7:37 left in the second quarter with a five-yard run by Jones. ECU then tied the game at 21, with 5:13 left in the second half on Pickett’s first TD of the game. Pickett caught a 25-yard pass that capped off a four-play 43-yard drive.

The Reddies took a 21-28 lead with 2:10 left in the second quarter and held on for the lead through the end of the half.

ECU earned the win despite having a 410-468 deficit in total yards for the game, largely due to the two interceptions and a forced and recovered fumble. The Tigers held possession of the ball, with no fumbles and just one interception in the game.

ECU will now return home to face Southern Nazarene, Saturday, Sept. 19 at Norris Field at Koi Ishto Stadium at 6 p.m. The game is the annual Chickasaw Appreciation Day, where all members of the tribe and its employees will receive free admission with their Chickasaw ID’s.

Notes: The win breaks a 10-game winless streak for ECU against Henderson State that includes a span of 18 years where the teams did not play…the streak is nine losses and a tie (Sept. 14, 1991).