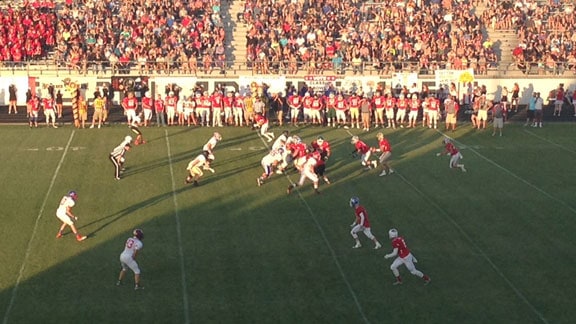 The East team has the ball on the opening possession of Classic Bowl XXVIII. Staff photo.

WOODWARD – Defense took center stage on Saturday evening at Boomer Field as the 28th Annual Classic Bowl went into the final five minutes with the West All-Stars leading 2-0. In those final five minutes, however, it was the East All-Stars who broke through with two scoring drives that earned the 11-2 victory.

Both teams were stopped on downs on their opening drive of the game, but a 41-yard punt from Matt Young (Turpin) pinned the East All-Stars at their own five yard line to begin their second drive of the night. On second down, East quarterback Kyler Hensley (Mooreland) was corralled in the end zone by West defensive end Jaden Valles (Hooker) to give the West All-Stars an early 2-0 advantage.

At the time, it seemed unlikely that the 2-0 score would hold up for much longer as both teams had opportunities to score early in the game. The teams would trade punts on their next drives, taking the game into the early stages of the second quarter with the same score. The West All-Stars would begin a drive deep in their own territory and use 11 plays to get the ball out past midfield, but running back George Dominguez (Turpin) was stripped on a run and Harrison Muegge (Deer Creek-Lamont) recovered the fumble for the East squad.

The East All-Stars were unable to convert the turnover into points and they went three-and-out on their final two possessions of the opening half. The West All-Stars had drives of six and eight plays, respectively, to end the second quarter but the half ended on Dayton Metcalf (Hooker) pass that was broken up by East defensive back Tabor Johns (Hennessey) near the 10-yard line.

Time moved quickly in the third quarter as both teams tried to find their footing and move into scoring position. After the West team went three-and-out to open the half, the East All-Stars had a five-play drive end with a punt, but Josh Silk (Sayre) was stripped as he returned the punt for the West team and Logan Meriwether (Waynoka) recovered to give the East new live in West territory. The West defense would stiffen at that point, getting sacks from Kolby Hall (Perryton) and Kell Parker (Weatherford) to move the East team back into their own territory and force another punt.

The East All-Stars again took over with 2:02 to play in the third quarter and embarked on a nine-play drive that spanned the end of the third and beginning of the fourth quarters. Hensley found Josh Hampton (Cashion) for a 13-yard gain on second and seven, moving the East team down to the 10-yard line for a goal to go situation. Hensley had his own number called on each of the four plays, getting down to the one yard line before bobbling the snap on fourth and goal and being taken down by Metcalf and Triston Villines (Balko) in the backfield.

The momentum gained by the goal-line stand would not carry over for the West All-Stars, who went three-and-out on their ensuing drive and gave the ball back to the East at their own 35 yard line. Logan Larue (Crescent) directed the East All-Stars next drive, completing passes to Blake Murray (Mooreland) and Hampton to move into the red zone once again. On fourth and two at the eight, the West defense again rose to the challenge as Valles stripped Kolton Mueggenborg (Kingfisher) as he tried to extend the drive and give the ball back to the West with 5:38 to play.

On the very next play, West quarterback Kade Marlatt (Woodward) mishandled the snap from his center and Muegge pounced on top of it to give his East team life once again inside the red zone. This time, however, the East would capitalize. Despite a sack on first down and a holding penalty on second down, Beau Jinkens (Kingfisher) found Hampton uncovered for an 18-yard touchdown that put the East All-Stars on the board with an 8-2 lead and 4:39 to play after Jinkens carried the ball in for the two-point conversion.

Needing to make something happen in the passing game, the West All-Stars went to the air on their next drive, but Metcalf’s second-down pass was intercepted by Cade Mitch (Okeene) of the East and returned into the red zone with 3:15 to play. The East only moved the ball five yards over the next six plays, but they were more concerned with running 1:30 off the clock and bringing on Murray to kick the game-clinching field goal from 31 yards out that made it 11-2 with 1:45 to play. The West All-Stars got a big 56-yard kickoff return from Silk and moved the ball into East territory before Metcalf was intercepted by Hunter Miller (Mooreland) in the final minute to secure the victory.

Even with the late scores, defense was the name of the game at Classic Bowl XVIII. The game saw 113 total plays run and 283 yards of offense gained for an average of just over 2.5 yards per play. The West All-Stars had 13 tackles for loss and six sacks, while the East All-Stars countered with three sacks and nine tackles for loss in a game that saw four fumbles and two interceptions.

Earning MVP honors for the West All-Stars was Jaden Valles, who had a game-high 10 tackles – all solo – with five tackles for loss, two sacks and one forced fumble. He also accounted for his teams two points on the safety in the first quarter and caught one pass for 14 yards.

Josh Hampton and Jake Curless were the Co-MVPs of the victories East All-Star team. Hampton caught seven passes for 100 yards and the game’s lone touchdown while Curless was a stalwart in the trenches with nine tackles, including three tackles for loss and one sack.