ECU moves on to GAC volleyball semis; SWOSU and SOSU bow out 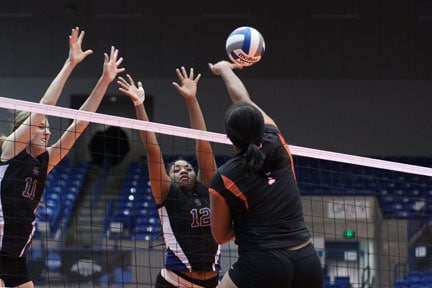 Hot Springs, Ark. – East Central defeated Southeastern in three sets on Thursday and advanced to the Great American Conference semifinals.  Southwestern dropped a five-set heartbreaker to Ouachita Baptist in the quarterfinal nightcap, and will not make a second straight trip to the conference semis.

The Lady Tigers’ win (25-22, 25-19, 25-23) was the third of the season over the Storm, winning at home, on the road and in the conference tourney at a neutral site, the Summit Arena in the Hot Springs Convention Center.

Third-seeded East Central, now 12-18 on the year, will meet the second seed, Arkansas Tech, in the semifinal match at 3:30 on Friday in Summit Arena.

Seniors Danielle Essix and Jessica Wilkerson recorded double-doubles for ECU.  Essix had 19 kills and 15 digs and recorded 21 points on the day, putting up two service aces. Wilkerson tallied 36 assists and 18 digs in the win.

Southeastern’s Courtney Miller (10 kills, 14 digs) and Megan Kunkel (12 kills, 17 digs) each posted double-doubles as the Storm close out the season with a 13-18 record.

Unfortunately for SWOSU, that was almost exactly how the regular season meeting between the two played out, going the full five and losing with a 16-14 fifth set score.

The Lady Dawgs saw very impressive play from senior Alison Cole.  In her final match, she put up a double-double with 16 kills and 11 digs.  Joey Collins led the way for SWOSU, as she registered 19 kills and 16 digs.