ECU pushes through for win at OBU 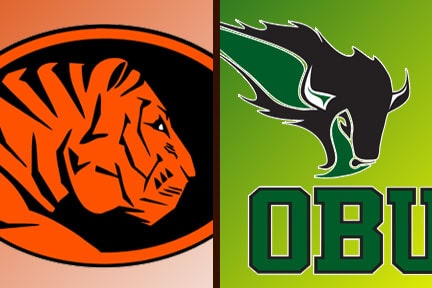 SHAWNEE – In the first game against Oklahoma Baptist in over 75 years, the East Central University football team earned a 41-20 win on the road in Great American Conference action.

“Anytime you can win on the road, it’s good,” said head coach Tim McCarty.  “I was glad to continue to get better at running the ball.  Having two backs over one hundred yards was awesome.”

The Tigers responded quickly with a 14-yard pass between Rocky Moore and Jackson, with 4:22 left in the first.

The second quarter is when ECU took control of the game, scoring 13 points.  Dotson started the scoring at 14:54 with an 11-yard TD pass from Rocky Moore.

Massuere then hit his two field goals at 8:32 and as time expired in the first half to give the Tigers a 20-7 advantage at the break.

ECU responded with two touchdowns in the quarter.  David Moore first earned an 11-yard passing TD at 5:27 and Dotson added his second of the game, with 2:00 minutes remaining, for a 34-14 advantage.

However, the Bison responded quickly, scoring less than a minute later on a 66-yard pass to cut the lead to 34-20.

The Tigers added a final touchdown in the final seconds of the fourth quarter for the 41-20 final.  Hall earned the TD on a three-yard leaping run.

ECU earned its key advantage on the rush with 323 total rushing yards to 243 from the Bison.  The Tigers defense was also key, netting two interceptions and recovering two fumbles.

ECU will now get ready for a battle with Northwestern Oklahoma State at Norris Field at Koi Ishto Field, Saturday, Oct. 3 at 6 p.m.  The game is the annual Pink Out and Take a Kid to A Game days.