ECU takes down No. 24 Arkansas Tech 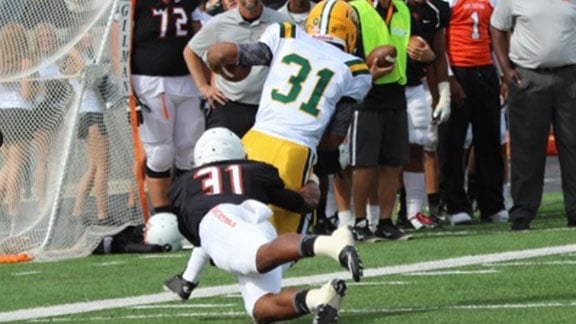 ADA – The East Central University football team rebounded quickly after last week’s loss by coming away with a 20-19 win over No. 24 Arkansas Tech at Norris Field at Koi Ishto Stadium.

The game resulted in two records being set, including a new single season passing touchdown record (26) by senior Rocky Moore. The day also saw senior Jameel Whitney tie the career tackle record of 278, when he recorded a season-best 14 tackles (9-5).

Sophomore Dezmon Jackson led the team with 125 receiving yards, while Nathan Pickett added 82 yards and a TD. Rocky Moore went 23-of-47 passing for 370 yards and two touchdowns. Heading into the day he was one passing TD from breaking the single season record of 24.

Junior Seth Handley led the running backs, with 32 yards, while the team tallied just 49 for the game.

Junior Dar-ray Jubilee was also key on defense, with 10 (5-5) total tackles and a sack for eight yards.

The Wonder Boys (5-2, 5-2 GAC) were the first to strike, with a 44-yard rushing touchdown with 8:22 left in the first quarter. However, ATU missed the extra point and only had a 0-6 lead, which would end up being a key to the games outcome.

That also allowed the Tigers to take the lead with a 58-yard passing touchdown between Pickett and Rocky Moore, with 6:17 left in the quarter.

The Wonder Boys gained the advantage back with a touchdown with 3:01 left in the first quarter (7-13).

The second quarter was all ECU, as junior David Massuere hit a 41-yard field goal and junior Randall Case caught an eight-yard TD pass from Rocky Moore, with six seconds left, to give the Tigers a 17-13 advantage at the half.

The Wonder Boys were the final team to score, earning a 45-yard field goal with 8:54 left in the fourth quarter that cut the deficit to 19-20.

In the final three minutes of the quarter, ATU had gotten the ball back at the ATU one-yard line after a fumble and worked their way all the way down to the ECU 15. The biggest play of the game ended up being a pass by Arsenio Favor that was intercepted by junior Lexus Jackson at the five-yard line with 28 seconds left to play.

The Tigers were able to take two team rushes to end the game with the 20-19 win.