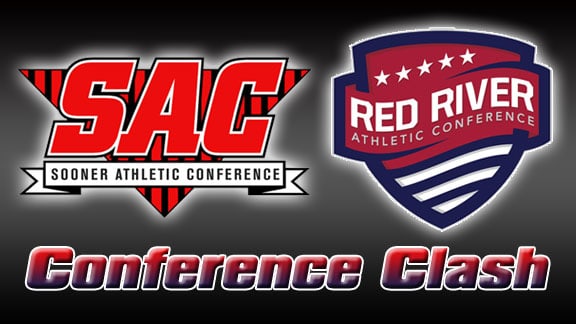 Each school will play the four teams from the other conference during a two-day span on Friday and Saturday.

Courtney Traylor had 38 assists for SCU in the win, while Baleigh Murphy had an impressive 30 digs in the season opener.

TWU’s Shelby Stinnett had a match-high 10 kills. Her teammate Shaylee Griffin had eight kills with a .727 hitting percentage.

Alyzabeth Vincent had 14 kills for St. Thomas in the win. Four players were in double digits in assists – Lauren Fernandez-Miller (15) and Katie Tadlock (12) for St. Thomas and Bianca Olivares (14) and Sarah Ahrens (10) for St. Gregory’s

Kali Shaw and Summer Skillern each recorded 11 kills for SAGU and combined to hit .667 on the match. Madison McClure had 17 assists in the win.

The Lady Eagles move to 2-0 on the new season. Traylor had 20 assists in this match and five service aces with no errors. SCU’s Priscila Hannah had 11 kills. Keshanti Tidwell and Keandra Tillman each had 11 kills for JCC.

The Cavs hit .325 as a team to pick up their first win of the season. Ashlyn Broussard had a match-high 12 kills and Cierra Mullins has 10. Olivares has 22 assists. Karlyn Estwick had 10 digs and nine assists for the Lady Lions.

It was the second sweep of the day for SAGU. Shaw had a double-double with a team-high 17 kills and 10 digs.  Sophia Ivy led with 22 assists and McClure tallied 19 more.

Stinnett had nine kills to help the Lady Rams to a 2-0 record and served up six aces to go with it. Sasha Robinson aided with 24 assists for the second straight match, while Kayla Hayes had 16. Wiley’s Rebecca Moustapha recorded a match-high 13 kills.