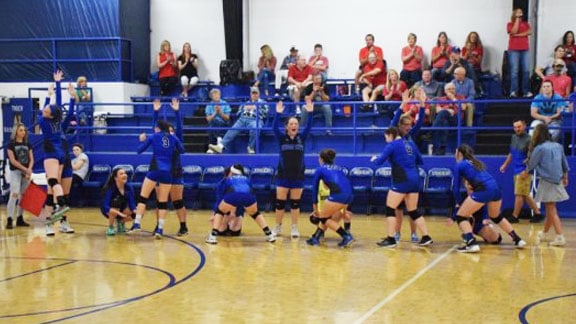 Union City played Southwest Covenant in the Regional Championship on Thursday, Sept. 29. The Lady Tigers waited to see who their opponent would be after getting a bye.

Erick and No. 10 Southwest Covenant battled it out. SWC came away victorious at a shot to play Union City in the championship game.

The atmosphere of the championship game was electric. The stands were full and the student sections were wild. These two schools are very familiar with one another. They have met two previous times this year, both games going SWC’s way.

The Lady Patriots ran the table in set one winning 25-18.

Set two was much different – SWC and UC matched point for point for much of the set. The score was tied 23-23 and the Lady Patriots capiltized on a service error. However, UC tied the game and rules state you must win a set by two points.

The Lady Tigers knew they now had to win three consecutive sets to return to the state tournament, but the Lady Patriots momentum from the previous set was evident as they jumped out to a big lead, 24-15.

Just when it looked like the Lady Tigers season may come to a hault, Coach Anderson called a timeout. Anderson stressed “one more point”. The girls took this and battled their hearts out point for point, led by Kennedy Sepulvado, who stepped to the service line and rattled a couple of aces to swing the momentum. Also, Morgan Englebretson and Julia Reyor were all over the court diving and tipping the ball hoping to continue their season “one more point” and they did for nine straight points putting the score at 24-23.

The Lady Tigers fell just short of an epic comeback, 25-23, but could not hang their heads after giving it their all.

Congratulations and good luck to the Southwest Covenant Lady Patriots in the State Tournament.

This article was first posted on the Union City H.S. website and reposted with permission. It can be viewed HERE.