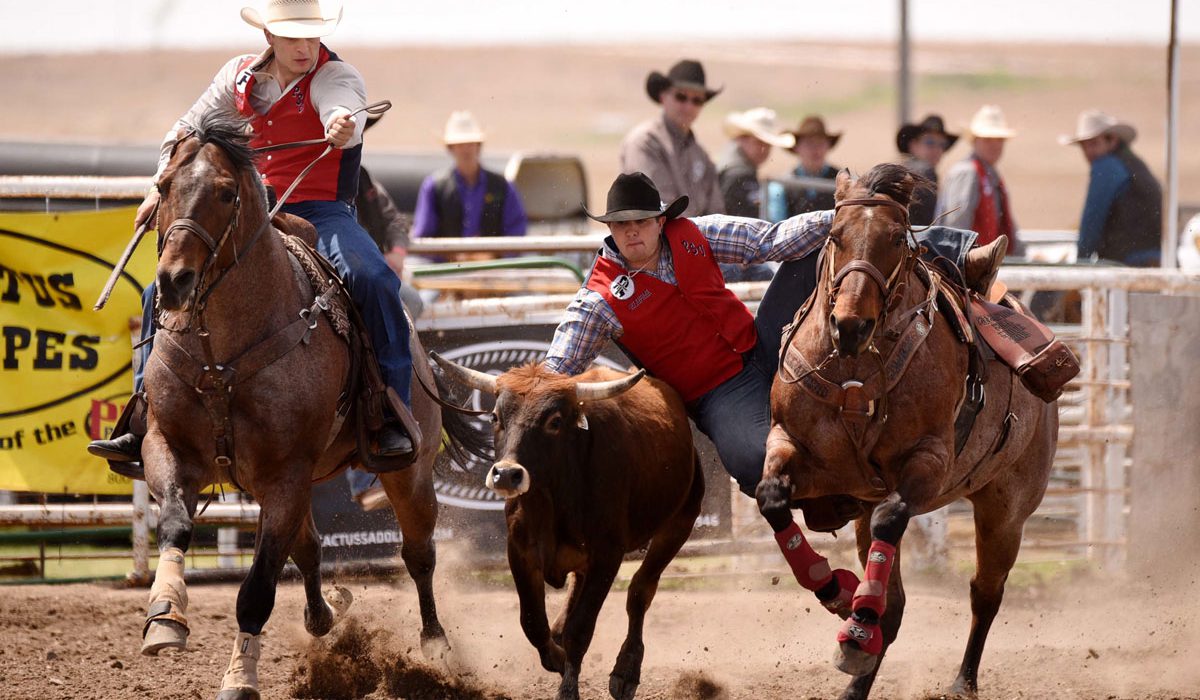 HAYS, Kan. — The Oklahoma Panhandle State University Rodeo team competed at the ninth Central Plains Region college rodeo this past weekend in Hays, Kan. However, more than just your typical rodeo competition took place. Every year at Hays, the region gets together and votes on several things including Coach of the Year, Horses of the Year, and new event directors.

This year Panhandle State’s very own head coach Robert Etbauer was selected as the Central Plains Region Coach of the Year and Rambo, the seventeen-year-old stud horse, owned by Etbauer was voted as Men’s Horse of the Year for the fifth time. This duo plays a very key part in the success of the rodeo program.

Being named coach of the year is well known territory for Etbauer. This is his third time to receive the honor in his six years of coaching at Panhandle State. This award could not have been given to a more deserving candidate. The two-time world champion bronc rider and hall of famer has dedicated his life to bettering the Panhandle rodeo program.

Robert’s middle son, Trell, had this to say about his dad, “Dad has always wanted to help people and horses get better to be the best they can be. His barn and livestock are always available to those wanting to sharpen their skills and those who work hard.”

“He loves rodeo and Panhandle State because of all the support it gave him when he was in college. He enjoys when cowboys and cowgirls come through OPSU and then go on to win outside of college.”

Robert has gone above and beyond the duties of head coach and the rodeo team is grateful to have him at the reins.

Etbauer’s horse Rambo is one of a kind. There are very few horses going to the college rodeos that are as versatile as the big roan stud. On any given weekend, Rambo can be seen in the tie-down roping, breakaway roping, goat tying, hazing in the steer wrestling, and both ends of the team roping.

“Rambo is one of the most reliable horses I have ever ridden,” senior Josh Frost said. “You can always count on him to do his job. No matter what the event, he puts out all he has and gives whoever rides him a good chance to win.”

Rambo is definitely a seasoned veteran and is an important part of the Panhandle State Rodeo family.

Members of the Panhandle State Rodeo team aren’t shy about stepping to the plate and taking the added duty of being event directors. Two of the team members were elected to be event directors for the upcoming rodeo season. Sadie Latham was voted goat tying director and Taylor Jacobson was voted team roping director.

On the women’s side, freshman Bridget Merrigan and Taylor Jacobson qualified for the short round in the breakaway. Merrigan was 8.3 seconds on two head to finish third in the average. Jacobson was 3.3 seconds in the long round to finish third, but didn’t get the clock stopped in the short go.

The Aggies will finish out their regular season this weekend at home. The Doc Gardner Memorial Rodeo is at the Henry C. Hitch Pioneer Arena in Guymon, Okla. Performances are Thursday and Friday at 7 p.m. and Saturday at 4 p.m. Tickets can be purchased at the gate for $10 per performance or $20 for all three performances. Children under 12 get in free. The event is also free to all Panhandle State students, faculty and staff with campus ID.

Don’t miss your chance to watch some of the best in college rodeo compete for their spot to the College National Finals Rodeo!