Evangels get first ever win at OCU; No. 4 Stars win women’s game 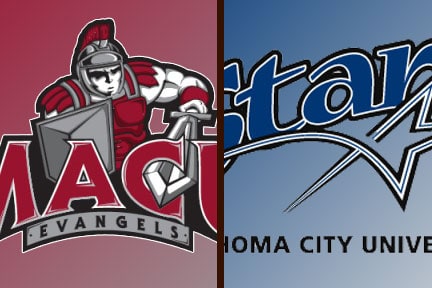 OKLAHOMA CITY — In a nip-and-tuck game that featured 11 ties and 15 lead changes, it was the Mid-America Christian University Evangels that pulled away for good in an 81-74 win at the Oklahoma City University Stars in a Sooner Athletic Conference matchup Tuesday night (Jan. 22) at Abe Lemons Arena on the campus of OCU. It’s the Evangels first win at OCU since joining the NAIA in 2007.

It was tied for the 11th and final time at 51-51 when Charlie Shorter put the Evangels on top to stay with a four-point play at the 12:41 mark of the second half.

A three by Reggie Davis extended the lead to seven with 10:19 left, but the Stars three times trimmed the lead to two over the next three minutes.

But buckets by Davis and Yuri Hager and three straight points from Josh Minner gave the Evangels some breathing room with a 73-64 edge with 4:55 remaining.

A score from Josh Smith gave the Evangels their largest lead of the game at 76-66, only to have the Stars score the next six points to stay withing striking distance with 42 seconds remaining.

But Camilo Valencia and Shorter each made two free throws down the stretch to seal the victory for the Evangels.

The opening half was a match of surges as the Evangels (9-6, 4-2 SAC) made the first push with a 12-0 spurt on the strength of six points from Angelo Lewis and consecutive treys by Shorter and Valencia for an early 14-5 lead.

The Stars responded with 12 straight of their own to take a three-point lead at the 13:13 mark of the first half.

Shorter then hit two threes and scored eight points of a 10-0 run that put the Evangels on top 24-17.

Fittingly, the contest was knotted at 35-35 heading into the locker room.

Shorter led all scorers with 27 points on 8-of-14 shooting overall from the field and 6-of-7 beyond the arc. Lewis scored 20 along with seven rebounds and four steals, while Minner added 12 and also pulled down seven boards. Valencia dished out a team-high five assists.

Terry Johnson paced the Stars with 25 points and Troynell Adams scored 18. Jones chipped in with 17 and Elhadji Wade had a game-high 13 rebounds for OCU (8-7, 1-6 SAC), who have now dropped five straight.

MACU will next face another nationally ranked opponent in No. 21-ranked USAO on Thursday night (Jan. 24). Tip-off is set for 8 p.m. inside the Gaulke Activity Center.

OKLAHOMA CITY — The Mid-America Christian University Lady Evangels made things interesting in the first half, but the No. 4-ranked and defending NAIA National Champion Oklahoma City University Stars eventually pulled away for their 14th straight win, 75-49 in Sooner Athletic Conference action Tuesday evening (Jan. 22) at Abe Lemons Arena on the campus of OCU.

The Stars started quick by scoring the first 12 points of the game and then led 30-10 behind 12 points from Lauren Gober.

MACU battled back as Kourtni Williams scored six points and Emilie Schirmer hit a three to cap a 9-2 spurt to close within 32-19 at the 5:41 mark of the first half.

OCU made three free throws at the end of the half to take a 41-28 lead at the break.

The Stars then showed why they’re ranked fourth in the nation by charging out of the gate and out-scoring the Lady Evangels 21-3 during the first 7:40 of the second half as consecutive buckets by Kayla MacKenzie built the lead to 62-31.

The closest the Lady Evangels could get from that point was 20 after a three by Schirmer made it 69-49 with 2:18 left.

Gober led four Stars in double-figures with 23 points and Katie Hall added 12 with a game-high 13 rebounds. Desiree Jeffries also chipped in with 12 points with four assists and MacKenzie added 11.

The Lady Evangels will next host USAO on Thursday evening (Jan. 24) at 6 p.m. inside the Gaulke Activity Center.