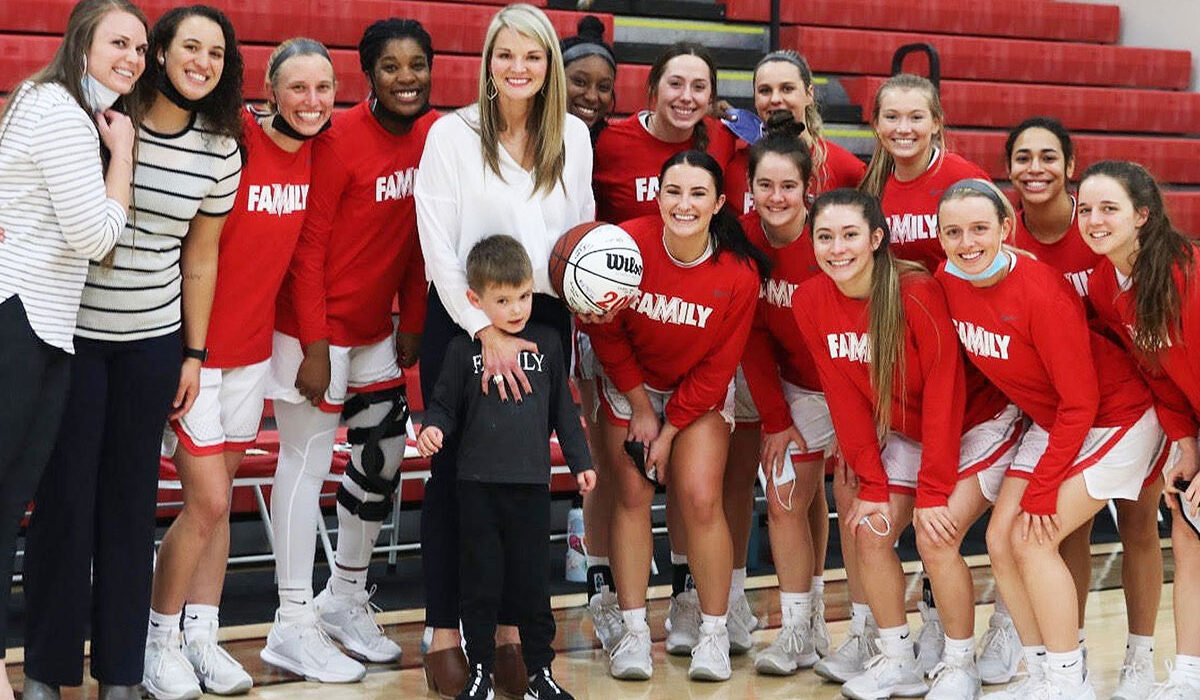 The victory was Moeller’s 100th win at MACU, reaching the feat just two hours after being honored during the pregame festivities for reaching her 200th overall coaching win when the Evangels defeated Baptist Bible (Mo.) 116-31 in the Gaulke Activity Center on Oct. 28.

Mid-America Christian (7-1, 4-0 Sooner Athletic Conference) dominated on the offensive and defensive ends in the early going, jumping out to a 14-3 lead through the first five minutes. Presley Payahsape and Ossyana Ozoani combined to score 10 of the Evangels’ 14 points during the run.

The Evangels finished the period strong, scoring nine of the last 11 points as a pair of Sydney Wycoff free throws with 46 seconds remaining allowed MACU to take a 26-15 edge into the second quarter.

After the Golden Eagles opened the quarter with a three-point play, MACU surged away with 12 unanswered that featured a pair of threes from Payahsape and McKenzi Lamer. The Evangels closed out the run with a Payahsape steal that led to a fastbreak layup for Lexi Hernandez to set the score to 38-18 with 6:42 to go.

MACU built its largest lead of the contest when the Evangels went on a 12-3 run during the final half of the second quarter. Lamer nailed a pair of threes on back-to-back possessions and following a three from JBU’s Taylor Fergen, the Evangels rattled off six more on a Hernandez triple and an Aneli Thomsen three-point play to swell the MACU edge to 50-25 with 2:39 until half.

JBU rattled off five to trim its deficit to 20, but the Evangels matched it heading into the break off a Lamer three with 59 seconds left and an Aaliyah Endsley layup with 17 seconds on the clock to set the halftime score to 55-30.

John Brown fired off seven straight to start the second half before Payahsape buried a three from the right wing to push the MACU advantage back to 58-37 with 8:10 to go.

The Golden Eagles continued to claw their way back, tallying 10 of the next 12 as Marta Matamala knocked down a three with 5:18 remaining to trim the MACU lead to 60-47.

With 4:56 remaining, Anna Kash helped swing the momentum back the Evangels way when she pump-faked her defender into the air after receiving an inbound pass, took a dribble and hit a pull-up midrange jumper to start a 10 unanswered run. After Thomsen finished a fastbreak layup from a Kyleigh Leverich dish, Hernandez quickly capped the streak seconds later when she picked off a pass near midcourt and took it in for the fastbreak layup to bring the score to 70-47 with 2:44 left.

Neither team could score over the final 1:38 as the Evangels maintained a 73-51 edge heading into the final period.

Once again, John Brown blitzed the Evangels to start, scoring the first 10 points on 4-for-4 shooting in the first 2:10 of the quarter to pull the Golden Eagles to within 12 at 73-61.

Ozoani put through MACU’s first score of the period with 7:01 remaining, but Fergen immediately answered on the other end with a three to bring it to an 11-point game at 75-64.

Mid-America Christian seized control once again with eight straight, four of which coming from Ozoani prior to Kash nailing a three from the top of the key with 4:11 left to push the MACU advantage back out to 83-64.

JBU’s Matamala managed to hit a three with 2:33 left to slice the deficit to 84-70, but that would be the Eagles’ final field goal of the contest as MACU closed out by scoring four of the final five points to wrap up the 88-71 victory.

It was a career night for MACU senior forward Ossyana Ozoani, who turned in a career-best 20 points on 8-of-13 shooting and finished just one board shy of a double-double with nine.

Presley Payahsape recorded her third-straight 20-plus point game, finishing with 20 points on 6-of-13 shooting, including 4-for-8 from three-point range and ripped down seven rebounds to go with a pair of steals.

Lexi Hernandez was once again filled the stat sheet both offensively and defensively, closing out the contest with 14 points on 6-for-11 from the field and 2-of-5 from three to go with five rebounds, five assists and four steals.

The Evangels got some strong contributions from their bench as McKenzi Lamer turned in 12 points on 4-for-8 from behind the three-point arc while Kyleigh Leverich once again led the team in assists by tying a career-high seven dimes.

Mid-America Christian is off to its second straight 4-0 start in Sooner Athletic Conference play.

In her milestone win, MACU Head Coach Hannah Moeller improved her record to 100-45 (.690) since joining the Evangels program prior to the start 2016-17 season.

Mid-America Christian will have a chance to get some rest before resuming Sooner Athletic Conference play on Thursday, Feb. 4 as the Evangels will host crosstown rival Southwestern Christian for a 6 p.m. tip-off inside the Gaulke Activity Center.