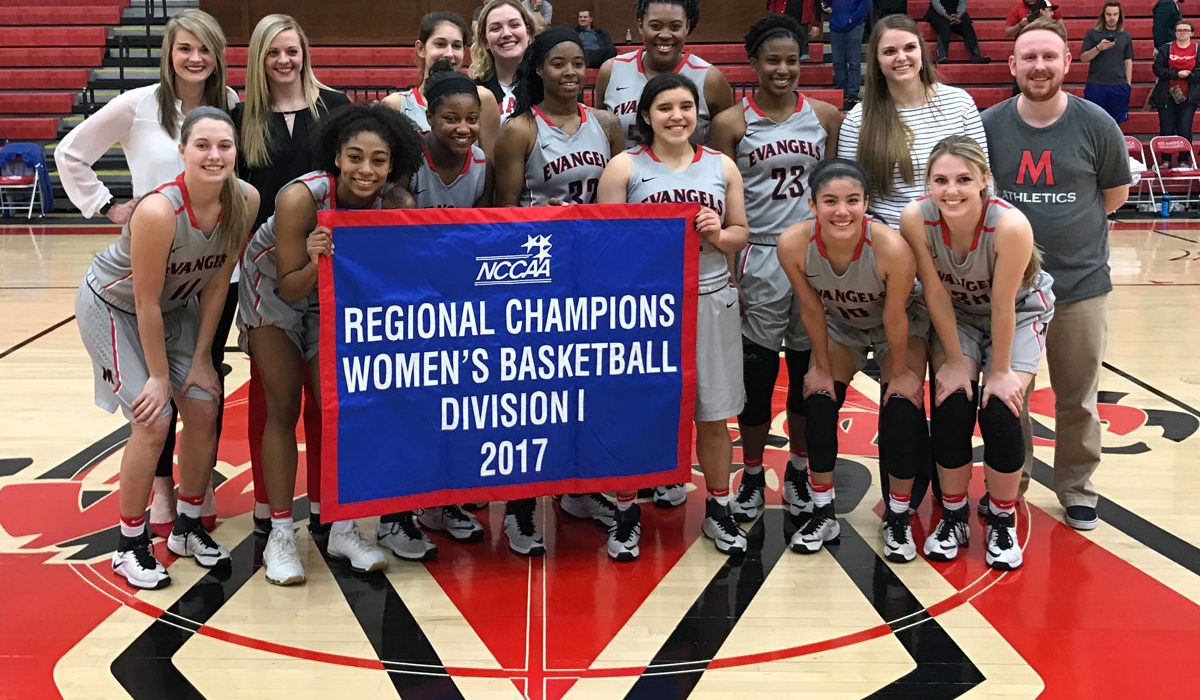 OKLAHOMA CITY – The Mid-America Christian University Women’s Basketball Evangels captured their first National Christian College Athletic Association (NCCAA) Central Regional championship since the 2010-11 season with an 85-76 victory over the Southwestern Christian University Lady Eagles on Saturday inside the Gaulke Activity Center.  The opponent in 2011 also happened to be SCU.

The victory moves the Evangels into the NCCAA National Tournament, which will be held Mar. 15-18 at Grace College in Winona Lake, Ind.

“Winning a championship is a great accomplishment and I’m so happy for our kids to get to achieve something this special. We look forward to going to Indiana and finishing our season with a chance to win a national championship.”

The Evangels were in control much of the way and every time the Lady Eagles made a run in the second half, Sarai Rodriguez seemed to find an answer.

After Lady Eagles trimmed a nine-point halftime lead down to three late in the third quarter, Rodriguez came through with consecutive treys to boost the lead back to 10 and then hit another trey to begin the fourth period that gave the Evangels its largest lead of the day at 61-48.

SCU wasn’t through and twice cut the lead to four, with the last time coming on a three by Maranda Janz that made it 78-74 with 22 seconds left.

Nevada Denton then split a pair of free throws and Jamie Lamb hit two freebies to push the lead back to seven.

After a pair of free throws from Eliora Johnson brought the Lady Eagles within five, Rodriguez shut the door by hitting all four of her free-throw attempts over the final 12 seconds.

The Evangels led for the majority of the first half and pulled out to a double-digit lead when a three by Jessica Fairley and three-point play by Mikki Flores made it 19-9.

With the lead at 21-11, the Lady Eagles scored the last five points of the period, including a buzzer-beating three by Janz that pulled SCU within five.

Flores and Denton then helped the Evangels close the half strong, as each scored five points to key an 11-2 push to end the half and put MACU back in control at 38-29 heading in to the locker room.

Rodriguez led all scorers with 27 points and also had five assists. She hit five-of-seven from beyond the arc and all six at the foul line.

D’Shala Powell scored 13 points with a team-high seven boards, while Lamb and Denton each scored 10.  Flores dished out a game-high nine assists for the Evangels, who run their record to 22-11 on the season.

Janz led the Lady Eagles (16-15) with 21 points, including hitting six-of-10 from three-point distance. Johnson scored 16 with a team-high seven boards and Andi McGill scored 12. Grace Hadley chipped in with 10 points for SCU.

The official NCCAA National Tournament bracket and pairings are scheduled to be released later tonight.