Experience paying off for NWOSU’s Allen 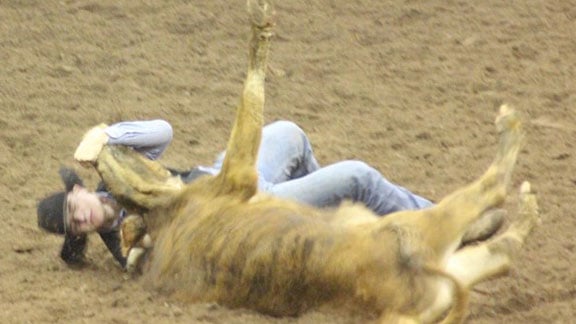 The Northwestern Rodeo Team opened the 2016-2017 in Colby, Kan., last week. OklahomaSports.Net gets you ready for the Southeastern Stampede on Oct. 6-8 with a review of the NWOSU trip to Colby.

ALVA – A busy summer in a labor of love seems to be paying dividends to Joby Allen and the Northwestern Oklahoma State University rodeo team.

Allen wrestled two steers to the ground in a cumulative time of 9.5 seconds to win the bulldogging championship at the Colby (Kan.) Community College Rodeo this past weekend.

“It really felt good to win that rodeo,” said Allen, a junior from Alva. “I’ve been rodeoing all summer. I bought my (PRCA) permit and learned a lot rodeoing with the guys in the circuit. I feel like that gave me an advantage, and it paid off.”

Allen downed his first steer in 5.0 seconds and finished third in the opening round. He then posted a 4.5 to win the short round and the overall title, bettering teammate and runner-up Colten Madison of Whiting, Iowa, by more than five seconds.

“I really didn’t know much about my first steer, but I was going to get out on him and hit him

quick,” Allen said. “It had rained that day, so the ground was a little sticky, and the steer wanted to die off on the back end, so that slowed me down a little.

“I knew my short-go steer was good, and I took a good cut at him.”

It worked. Between Allen and Madison, the steer wrestlers led the way to the Rangers second-place men’s team finish in northwest Kansas. Madison posted the fastest time of the rodeo, a 4.1-second run, to win the opening round. While his 10.7-second final-round run seemed long, it held up for fifth place in the round and the reserve title in Colby. “Last year this team was led by a good group of bulldoggers,” Allen said, adding that J.D.

“Out of the top six bulldoggers in the (Central Plains) Region, we had three of them.”

Now Allen is atop that mountain with nine more events remaining. The season is long, but he knows there are opportunities that lie before him.

“I’ve run more steers since school let out between practicing and rodeoing than I ever have before, and I think going to the next step in the circuit made me compete at a better level,” he said. “I think it really helped my bulldogging out. It made me more aggressive and think about things more.” Allen wasn’t the only Ranger to claim the title in Colby; he was joined by the team roping tandem of Kass Bittle and Edgar Fierro, who were 7.7 seconds to finish in a tie for third in the opening round, then posted a 7.0 to win the final round and the average. They were joined in the short round by Brandi Hollenbeck and Grayson Allred, who also tied for third in the opening round but didn’t score a time in the championship round.

Mason Bowen finished third in tie-down roping with two runs of 10.0 seconds each, while Cole Patterson shared the long-round win with a 9.5-second run. Taylor Donaldson finished fifth in the first round; both Patterson and Donaldson had no-times in the short round.

It’s just the beginning of a long season, and the teams have three weeks remaining until they return to action in Durant, Okla., on Oct. 6. There will be plenty of practice opportunities between now and then, and that’s something Allen and his teammates lean on to improve. “Stockton (Graves) really helps us out in practice every day,” Allen said of the Rangers’ coach. “If he sees something wrong with your horsemanship or when you’re on the ground, he’ll address it. We have these matches that put us behind the barrier and help us think of the right ways to do things.