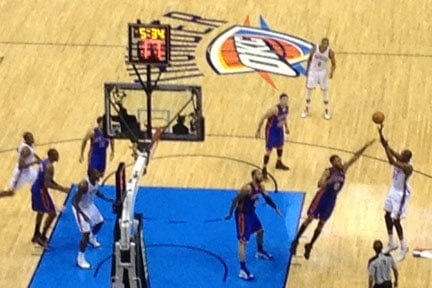 Don’t be fooled by the final score.  It wasn’t that close.  Oklahoma City simply blew out New York.

A couple of big Thunder runs in the first half ultimately did in the Knicks, as OKC went on to win 104-92.

The Thunder broke out of a 13-13 tie in the first quarter to expand the lead to 30-20 just before the end of the period.  But the game-changing run came late in the second quarter when the Thunder scored 12 straight points to go up 63-40.  New York looked ready to get back on a plane out of Will Rogers throughout the remainder of the game.  Oklahoma City led by as many as 27 in the fourth quarter.

It wasn’t just offense that paced the Thunder game Saturday night.  OKC had 11 blocks (Serge Ibaka, 3) and 12 steals (Russell Westbrook and Reggie Jackson 3) in the win.

Kevin Durant led the way in scoring with a game-high 28, while both James Harden and Westbrook each topped the 20-point mark with 24 and 21, respectively.

All 13 players that suited up for OKC saw more than five minutes of action on the court.

Oklahoma City extended its win streak to a league high six, while moving to 11-2 on the season.  The record is the best in the Western Conference and a half game behind the Chicago Bulls overall.  New York fell to 6-6.