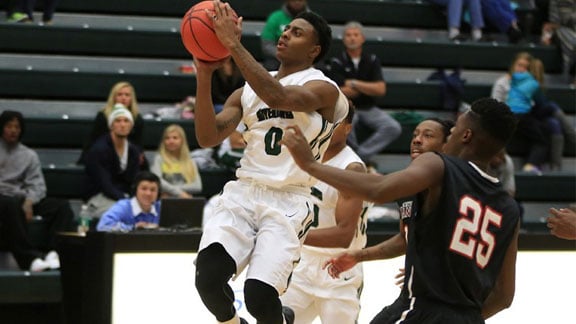 It comes down to one game for NSU and there are two top 15 matchups in season finales. Here are five games to follow on a snowy final day in February.

The RiverHawks trail Emporia State by a half game in the standings, but a win at home today over the Tigers would put them in the 12th and final spot in the MIAA postseason tournament. FHSU won the earlier matchup this season, 77-49, at Hays, Kan. A win would also stop a four-game slide for NSU. The 12th spot in the league is where the RiverHawks were picked in the preseason.

This game will determined the No. 2 seed in the Red River Athletic Conference, give a little momentum to the winner, and possibly exact a little revenge for Langston, if the Lady Lions are able to get the home win. Wiley has won three of the last four meetings, including an 85-76 win in Marshall, Texas, that stopped Langston’s 17-game winning streak. Look for a high octane afternoon as Wiley is No. 2 in the country in scoring (88.9 ppg) and Langston in No. 3 (87.1 ppg). It’s a top 15 matchup in which both teams are likely to go to the NAIA tournament regardless of the outcome and should be a fun way to close the season at Gayles Fieldhouse.

With a two game lead in the conference, the Evangels have already secured the program’s first-ever SAC regular season championship. MACU overcame a 17-point halftime deficit on Thursday to win at TWU and take the title. The Evangels have won six straight and beat WBU, 84-65, in the season’s first matchup.

The national media have Tulsa as a team just barely on the outside looking in at the NCAA Tournament. But to watch the Golden Hurricane play, it would seem apparent this team should be in. TU gets another chance to prove it and again on a national stage (ESPNU, 7 p.m.). Tulsa is 7-3 on the road this season and has won three straight. Something nice to watch on TV if you are snowed in.

The Bison have won their last two after dropping five in a row. A win today could keep them as the sixth seed in the SAC tournament, and more importantly mean they would have to win only three games in Oklahoma City to take the title instead of four. OBU will need to win the league tournament to secure an automatic bid in the NAIA national tournament. The Bison have been to the NAIA tournament the last 14 years. USAO is trying to get a season sweep against OBU, while stopping a five-game slide.

[Editor’s note: And it still will be, when the game is played on Monday, as it has been rescheduled.]