Five questions about … running backs in 2014 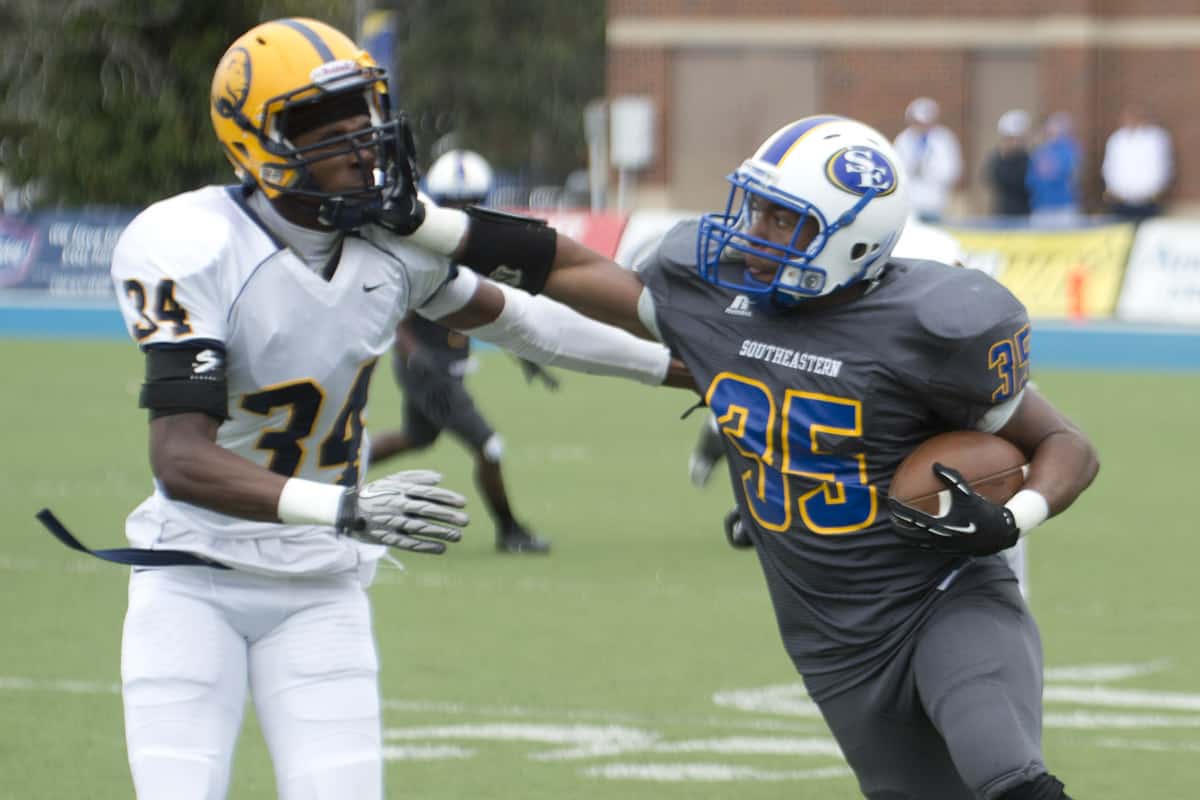 Today we look at the running back position and pose some questions about the 2014 college football season.

• How will SOSU’s Wortham follow his fabulous freshman season?

Wortham burst onto the scene in Durant, rushing for 220 against Southern Arkansas in the season opener.  He went to record 1,119 yards on the ground and was named the Great American Conference Freshman of the Year.  He had five 100-yard days in 11 games.
But Wortham is a known commodity now.  And although he did what any player or team is supposed to do – don’t play down to the level of a lesser opponent – the numbers were higher against defenses that weren’t as good and when facing better defenses in the league the numbers were lower.  There is also a new head coach at Southeastern whose offensive philosophy might change the offensive slant.
It seems likely that Wortham can cross the 1,000-yard mark again as a sophomore, but he won’t be able to take any games off in order to keep that pace.

• What will the workload for like for two (or more) strong backs at NSU?

Joel Rockmore is back for his junior season wtih RiverHawks in 2014.  A preseason All-American coming into 2013, Rockmore tore his ACL in the second game of the season and was out for the remainder of the year.  Enter Terrance Dixon, then a junior who started eight games following that and notched 720 yards on the ground along with 10 touchdowns.
Both return and could see a fair amount of time in the backfield in Tahlequah, though it shouldn’t be a surprise if Rockmore regains the nod at starter in the early going, which was lost due only to injury.
And don’t forget about Steven Hopper.  The junior also logged time in every contest last season, starting once and gaining 595 yards with four rushing TDs. Will there be enough carries to go around?
It does seem sure that whoever comes through as the starting quarterback for new head coach Rob Robinson should feel comfortable with the running game, no matter which back is in the game.

Joshua Birmingham has earned a spot with the greats of UCO football.  He is second all-time – behind Steve Tate – on the career rushing list and only he and Tate rushed for more than 1,000 yards in a season three times.  But Birmingham has graduated and he leaves behind big shoes in the backfield to fill.
Sophomore quarterback T.J. Eckert split time with senior Adrian Nelson and has some effective targets to throw to, including preseason All-American Marquez Clark.  Another sophomore, Jake Gandara, was second on the team in rushing last season and his 5.5 yards per carry was tops among backs.
If Eckert and Gandara come out of camp at the top of the depth chart in their respective roles, it is not unlikely to think the two could combine for more than 1,000 yards on the ground.  But with Clark and fellow senior receiver Christian Hood back, with Gandara picking up receptions as well, the Bronchos air attack might be at the forefront this season.

Only two players from Oklahoma schools in Division II crossed that mark in 2013 (Wortham and Birmingham), but there is little reason to answer this question with a, “No.”  McClendon netted 964 yards rushing in 2013, with an average of 5.4 yards per carry.  He has strength in the Aggie backfield with him in the person of Caleb Holbrook.  The senior quarterback can pass well and catches a defense’s attention, too.  So the opportunity looks to be there for McClendon as the bulk of the offense doesn’t have to rest on his shoulders.
He is versatile and able to rack up yardage with receptions over the middle, but his running game is hard to stop.

* Does the running back spot at SWOSU get enough love?

So much of the talk in the offseason about Southwestern’s offense has been about how to replace Dustin Stenta (quarterback) and Ryan Corbin (tight end).  And rightfully so.  Both achieved many postseason awards following stellar careers and the offensive breakdown for 2013 was close to 2-to-1 regarding passing yardage to rushing yardage.
But Karl Hodge and starter D.C. Walker combined to run for 1,300 yards last season.  And Hodge, who accounted for 673 yards and two touchdowns, is coming back for his senior season.  Karltrell Henderson, a freshman who rushed for 1,250 yards and 12 scores in his senior year at Southmoore, comes off his redshirt season and could play a big part as well.
The ground game in Weatherford may draw some more attention in 2014.