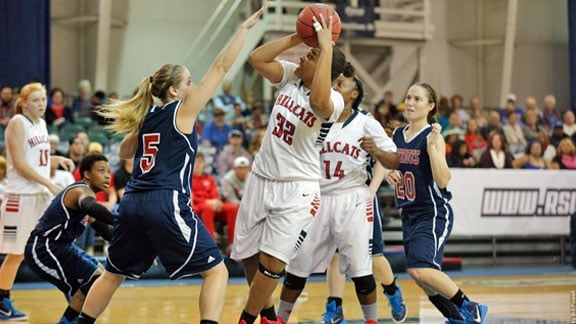 Let’s take a look at five questions taking shape around tonight’s college basketball games around the state.  We might even come up with some answers before the games start.

It’s rivalry night in the GAC and these two meet in Ada with each coming in on a three-game losing streak to the same set of teams.  Against common non-conference opponents, SOSU went 3-0 and ECU was 2-1 – the Storm beat UCO.  Each team has lost only five games on the year – SOSU (12-5, 5-4 GAC); ECU (10-5, 6-3 GAC)
So what’s the difference for tonight?  Home court.  Conference wins on the road are too difficult to just chalk up.  So the Tigers need to take advantage of being in the Kerr Center.
Additionally, ECU is currently in third in the league.  After that, there are many teams fighting for that fourth place spot.  Third seed in the conference tournament may prove to be a good seed to have in March, so ECU should fight to keep it. (It seems unlikely Arkansas Tech or Harding will drop below the No. 2 seed)

Slight edge to the Tigers in Ada tonight.

• Who will score more points? Ty Allen or R.J. McGhee

Oklahoma Baptist’s Allen is averaging 19.9 points per game and his scoring is big for the Bison, who are now at No. 8 in the country.  But his outside shooting has gone away of late.  Allen is 0-13 from behind the arc in the last three games.  He needs to hit a couple from long range to break out of that slump at USAO tonight.
McGhee is just out of the top 10 in scoring in the NAIA (No. 11) with 20.2 ppg.  He has scored less than 20 points in each of his last four games, though.  OCU has also lost its last three games – SAC contests – by a total of eight points.  Tonight, the Stars host SAGU.

Give the edge to McGhee at home in Abe Lemons Arena to break through the 20-point barrier and lead his team to a win.

• Which team is more likely to suffer a letdown? Mid-America Christian or St. Gregory’s

The Evangels have won four straight and given coach Willie Holley his 800th victory.  The emotions of the last two weeks have been very high.  MACU is also in the Top 25 this week and leads the SAC standings.  Can they keep it up against Texas Wesleyan?
The Cavs hit a rough spot in the schedule losing five of six after opening the season at 3-0 and ranked in the top 10.  But SGU has won three of its last four, including two wins over ranked opponents.  St. Gregory’s has to keep up that pace on the road on Saturday at an OCU team that has suffered three straight near-miss losses.

The emotional ride that has been the Countdown to 800 has probably taken its toll on Mid-America Christian, but the road atmosphere at OCU is going to be even more difficult to overcome for the Cavs.
I don’t think either team will suffer a letdown this weekend, but if it were one of these two, edge to SGU.

• Which women’s team has the better chance to pick up a good conference win tonight? Rogers State or Southwestern

The Hillcat women start a four-game home stand tonight with a contest against Oklahoma Christian.  RSU has won three of its last four and Breanna Burford is coming off a 20-point performance in the win on Saturday.
Southwestern is going on the road for game three of four on the road and it will be at arch-rival Northwestern.  The Lady Dawgs had found some momentum at home, but dropped two on the road in Arkansas last week.

SWOSU should be playing with desperation tonight in Alva, but that’s a hostile environment and  the table is stacked a little better for Rogers State at home, with the deciding factor – in this comparison, at least – that OC hasn’t yet won a road game this season.  Edge to RSU.

• What are the odds the Southwestern/Northwestern men’s game is decided by more than five points?

It’s a new year, so of course these are two new teams.  But there are enough returnees on both rosters to remember both of last year’s one-point Ranger victories.  Southwestern was the favorite in both games, including the opening of the Pioneer Cellular Event Center.  The game at Percefull even went to overtime and was decided by a point.  Actually, the last three have been won by one with a SWOSU win in 2013.
So these two rivals have a knack of late to take it down to the wire.  The Bulldogs (10-6, 4-5 GAC) have to be favored slightly in this one again over the Rangers (4-12, 3-6 GAC) in Alva.

So the odds?  Not sure what Vegas would say, but I’d put them at 140-1 against a margin of greater than five points, as tonight’s game is the 142nd in the long series.
And SWOSU edges NWOSU, 72-69.