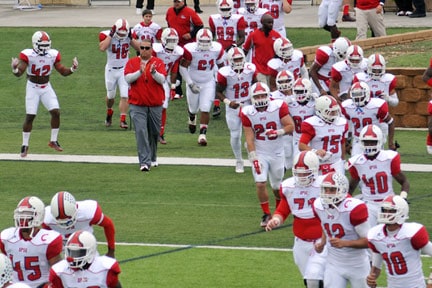 Aggie Football finished their season on the raod this week in Plainview looking for win number seven against Wayland Baptist.—Justine Gaskamp photo

Football season is winding down.  And no matter the records, games at this time of year almost always have significance.  Here are five reasons to pay attention on Saturday.

Baylor still controls its own destiny in the Big 12 conference race.  And a win on Saturday would keep that number in the loss column at one.  The Bears could still be in the conversation to make the four-team playoff field, even though national speculation still gives two two-loss teams from the SEC the preference.  But Baylor has never won in 11 tries in Norman, so there’s that.
Meanwhile, a win for the Sooners means two league losses for Baylor and the loser of the TCU/Kansas State game would also have two and lightning could strike after that for some kind of wild tie at the top.  It could happen.  Maybe.  And don’t forget – the Big 12 embraces co-champions.

Southeastern has shown improvement throughout the season and the team will have the chance at its first winning season since 2009 with a win in either of the last two games.  The final home game is on Saturday against a Tech team that has struggled of late.  The Wonder Boys have lost four straight and haven’t scored in double digits since a 21-14 loss to Southern Arkansas on Oct. 11.  Prior to last week’s 51-6 setback at Harding, the Storm offense racked up nearly 43 ppg in a four-game stretch and three of those were at Paul Laird Field.  And to secure that winning season before going on the road to face a resurgent team at arch-rival East Central in Ada in the season finale would be a good feeling.

November 1986.  Mike Tyson won his first heavyweight title.  Bon Jovi was at the top of the Billboard charts giving love a bad name.  “Hoosiers” hit the theaters.  Josh Peck of “Drake and Josh” fame was born.  It was also the last time OPSU won seven games, going 7-2.  The Aggies won five straight that year and had a six-game winning streak earlier this season.  OPSU can reach the seven-game win mark with a victory over WBU, a team it has beaten each of the last two seasons, including a 62-21 win last year.  Chris McClendon eclipsed the 1,000-yard mark rushing last week and the final number for the year will be determined on Saturday in Plainview, Texas.

OK, so nothing is definite.  That much is certain with the near miss that was last season’s Lions’ fate, when they won six straight to close the season and finished ranked No. 21 and just out of the playoffs.  And here they are again – currently ranked No. 23 and on a four-game winning streak, that would be up to six with wins in the last two games.  But the resumé is a little better this year.  If the Lions can beat SAGU and Bacone to finish the season, they would have a 7-3 record with two wins against D-II opponents and an undefeated record in the CSFL.  It is difficult to imagine a scenario in which that doesn’t end in a playoff berth.
So realistically, it’s win two and they’re in.  But two wins starts with one on Saturday.

Northwestern has gone home happy only once in 2014 and Southern Nazarene hasn’t experienced that since 2012.  To say that you could throw out the records when these two meet would be more of a courtesy than a motto.  Someone has to win this one.  However, long-term history and recent history both say it will be NWOSU.  The Rangers are 9-1 in the history of this series (and that loss was a subsequent forfeit due to an ineligible player).  Add to that the current 20-game losing streak owned by the Crimson Storm.  But SNU has seemed to find a stride in the last two games.  The Storm is averaging 32 ppg and took Southwestern to overtime last week.  Saturday is Senior Day in Alva and someone will go home happy.