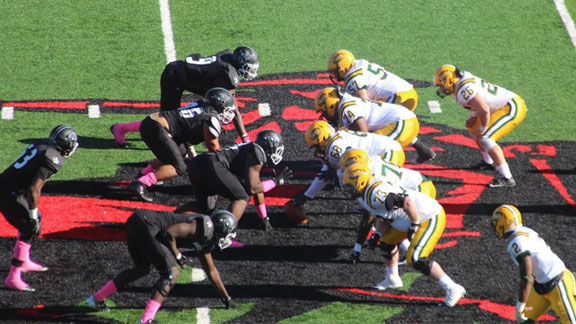 September has arrived and so has college football in Oklahoma!

Here are five things to prepare you for some of tonight’s games:

In the battle of the Tigers, there are two clear headliners coming in: East Central wide receiver David Moore and Ouachita running back Kris Oliver. In 2015, Moore became the first ECU receiver to cross the 1,000-yard mark in a single season. He will be catching passes from sophomore Jackson Lamb, who will be making his first start. Defense is always big for coach Tim McCarty’s teams and there is much depth on this year’s squad. Meanwhile, Ouachita returns Oliver, who rushed last season for 1.176 yards and was the Don Hansen national Freshman of the Year. Ouachita has won the last three contests between the two, including a 31-24 victory for OBU in 2015.

The Bronchos have put together back-to-back winning seasons, but want to take the next step to the playoffs. The schedule begins this season a little differently than the last two. UCO has beaten Lindenwood late in the year in 2014 and 2015 by a combined 82-33 score. Junior Clay McKenzie will get the start at running back after a season in which he rushed for 1,499 yards. Senior T.J. Eckert gets the nod as the starting quarterback. And Devontay Wilson anchors a strong defensive line. Lindenwood doesn’t return a lot of experience to the skill positions, but the program has won seven consecutive season openers.

This series started with the formation of the GAC and the Muleriders have had the Bulldogs’ number, winning four of five games through the last five years, but the average margin of victory has been only four points. Southwestern returns Marc Evans at quarterback, who was effective in his nine starts, tossing 25 TDs. He’ll have D.J. Jones to throw to again this year, someone defenses will have to key on. As for quarterbacks, Southern Arkansas had the 2015 First Team All-GAC QB in Barrett Renner, and he was just a freshman last season. There is no reason to expect anything but another close game in Weatherford on Thursday night, where SWOSU has won its last four home openers.

NSU coach Rob Robinson heads back up to Topeka, where he spent 12 seasons on the WU staff before becoming the head coach in Tahlequah. The RiverHawks set a school record when these two teams met last November, and it’s one they likely hope not to repeat. NSU punted 12 times in the 35-21 loss. They will be breaking in a new quarterback as sophomore Dimonic McKinzy takes the helm.
Still trying to figure out what the program is going to do without Joel Rockmore on the roster…

Two teams that have been near the bottom of the GAC standings want to get a jump start on the season and the way up the league ladder. A pair of Ranger seniors lead the way on each side of the ball. Reid Miller returns following a season in which he threw for more than 3,200 yards and 30 touchdowns. Joby Saint Fleur highlights a strong defensive line and is a preseason ‘all-everything.’ UAM has more players new to the program than returnees. The Weevils do get back Jeremy Jackson, who led the team last year in rushing and all-purpose yards. The all-time series is tied 3-3 and NWOSU won 52-31 last year in Monticello.