Five things you need to know this weekend’s games 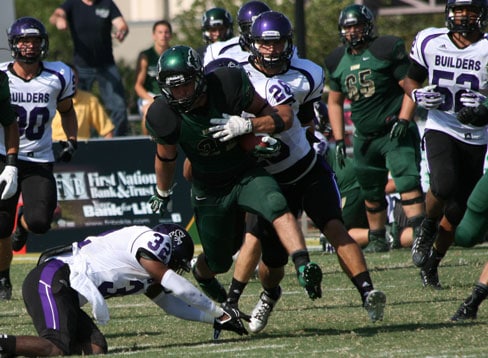 It’s here!  The first weekend of college football is here!  And congratulations to the Tulsa Golden Hurricane for getting things kicked off well with a double overtime win on Thursday.

Here are five things you need to know about this weekend’s games:

• It’s the 200th game for Oklahoma coach Bob Stoops and it gets here at the opening of the 120th season of football at OU.  The Sooners are 13-2 under Stoops in openers and have won the last four going into today’s contest in Norman against Louisiana Tech.  Oklahoma comes into the game having won its last four in 2013, while Louisiana Tech lost its last three.  Today’s game will be the first between these two schools.

• Bacone is 6-7 in season openers since 2001, which mirrors the school’s overall record of 64-74 over that stretch.  The Warriors are making their first trip to Iowa today to take on Northwestern (Iowa) in Orange City, but have played three Iowa schools (Northwestern, Grand View and William Penn) and are 1-2 all-time against schools from the Hawkeye State.

Oklahoma Baptist fell to Southwestern (Kan.), 26-22, in last year’s opener and are looking to return the favor today.

• Oklahoma State has won its last six openers and 10 of the last 11.  OSU takes on Florida State tonight in the AdvoCare Cowboys Classic (even the name suggests that OSU should win) in Arlington, Texas, and have fared well in the state lately.  The Cowboys have won 11 of the 13 games played in Texas.  OSU has never beaten an AP No. 1 ranked team, but has twice before beaten a defending national champion.

• Northeastern A&M has won their last two season openers, but the seasons have gone different directions.  The Norsemen won eight games following the opener in 2012, but only two more last year.
New NEO head coach, Ryan Held, has fared well in season openers in his tenures at other Oklahoma schools.  Held went 5-1 in openers at Southwestern and Oklahoma Panhandle, including a win over OPSU as the SWOSU coach and a win over SWOSU as the OPSU coach.

• Oklahoma Baptist takes on the team it faced in last season’s opener, Southwestern (Kan.), but this one is on the road in Winfield, Kan.  OBU lost 26-22 to the Moundbuilders last year.  It took the Bison until Game Six to win its first of the season in 2013, oddly enough against another Southwestern (this one from Texas).  OBU has a winning record in season openers and all time is 14-11-1.  However, the loss in 1919 to Tulsa was particularly harsh, as the Bison fell to the Golden Hurricane, 152-0.