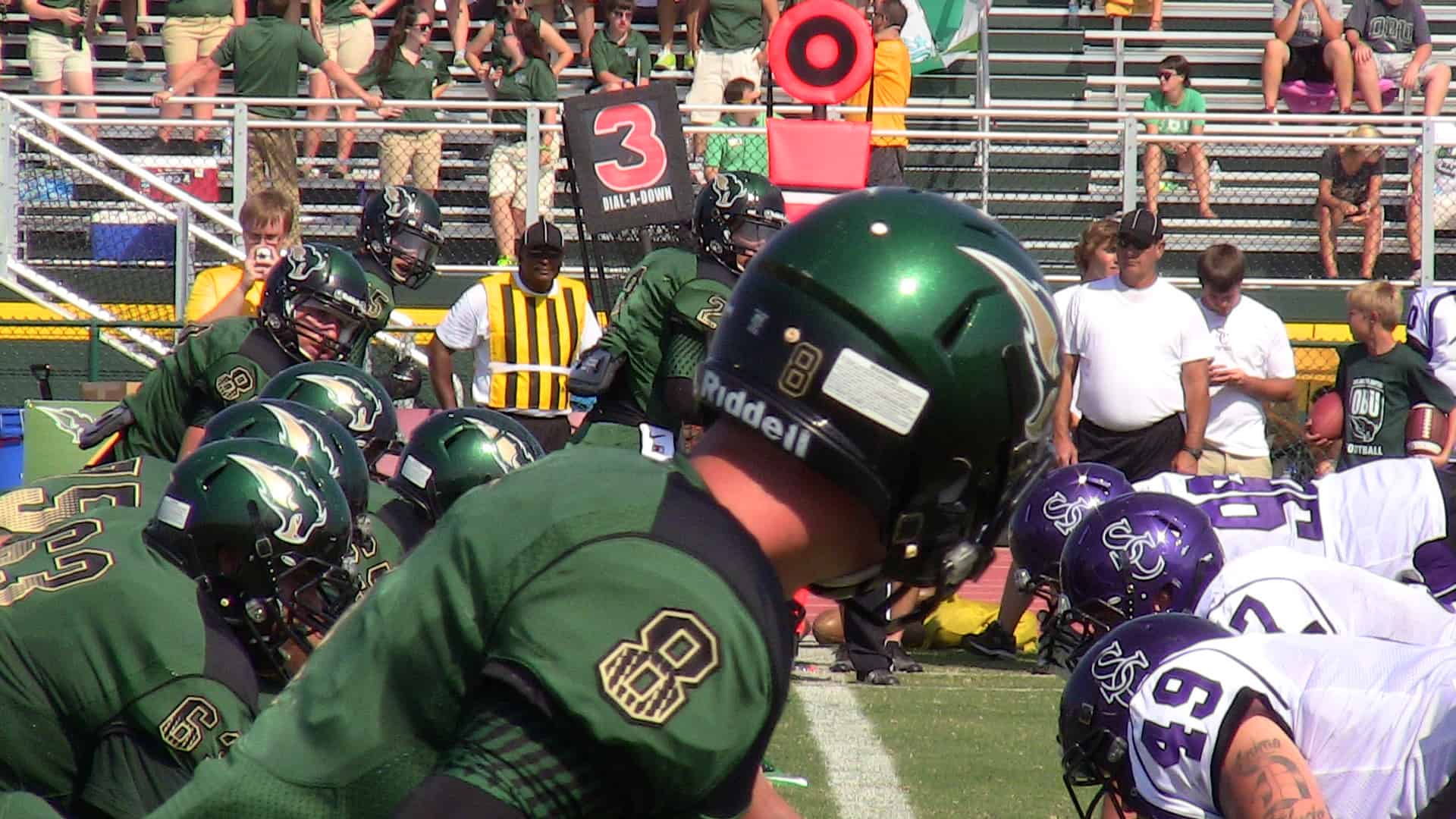 The final Saturday in September didn’t produce many wins for Oklahoma teams.  In fact, only three Oklahoma teams came away with wins – NEO, OBU and OPSU.
But we can come away with a five things from the weekend.

• Southeastern fans get their money’s worth to watch the Storm play.

SOSU is 1-3 so far in 2014, but the Storm have been in it to the end in games that keep the fans watching for all 60 minutes.  Other than the blowout loss to No. 4 Henderson State, all the Storm’s contests have come down to the final seconds.  On Saturday, Southeastern took a 29-28 lead with less than a minute to play.  But Ouachita Baptist’s Brandon Marks ran 14 yards up the middle for the TD with 11 seconds left and the Tigers hung on for the 35-29 win.  Each of Southeastern’s first two games saw the game-winning points achieved as time expired.

• Oklahoma Panhandle’s offense has awakened and is impressive.

The Aggies have put up 2,191 yards of total offense through four games, averaging nearly 548 yards per outing.  The total is the fifth highest mark in Division II.  The Aggies are 2-2 on the year, but have outgained their opponents in all four contests.  Caleb Holbrook has crossed the 1,000-yard passing mark (1,067) in just four games, while backing off the pedal in a 70-27 beatdown of Texas College, in which he threw for only 124. Chris McClendon has rushed for 479 yards this season and topped the 100 yards in the last three games, on pace to clear 1,000 on the year.

OBU allowed Southwestern (Texas) the first touchdown on Saturday.  And then proceeded to score the next (and final) 51 points of the game.  It’s not the first time this season the 4-1 Bison has rattled off a string of points.  OBU put the first 24 points on the board against Missouri Baptist and then the final 35 to end the game.  They also rung up 40 consecutive points against Southwestern (Kan.) in the season opening victory.

• Central’s defense is good, but can’t beat the No.1 team in the country by itself.

UCO held top-ranked and defending champion Northwest Missouri to just 13 points in the first half, keeping the deficit at seven, 13-6 on the strength of two Seth Hiddink field goals.  But the Broncho defense had to stay on the field too long and the Bearcats eventually wore it down for a 36-13 win.  Central was without the services of significant offensive contributors, namely the starting quarterback (Chas Stallard), leading rusher (Jake Gandara) and star receiver (Marquez Clark), due to injury.

• For Southern Nazarene’s offense, the struggle is real.

The Crimson Storm’s 58-0 home loss to Harding on Saturday marked the first time in 2014 in which SNU had been shut out.  But the Southern Nazarene had scored only 28 points (four touchdowns) in the previous three contests.  The point differential for the season now for the 0-4 Storm is 192-28 in the opposition’s favor.  And of the scoring, three of the four touchdowns came in the fourth quarter when the game had already been decided.  Southern Nazarene has now dropped 15 consecutive games.