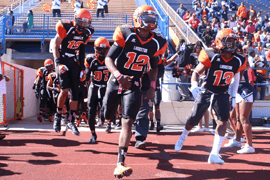 Here are this week’s takeaways.

• Langston has finally hit the NAIA portion of its schedule. Watch out!

The Lions went 1-3 through the month of September with a slate full of NCAA teams.  But this Saturday, Langston opened up conference play in the CSFL to the tune of a 61-0 blowout of Texas College.  There’s no question that LU schedules big each year to prepare for league play and we’ll see if it was enough to get through to the playoffs in 2014.  The early returns, at least from one game, are promising.  The offense scored eight touchdowns in the CSFL opener and the defense held the Steers to just 136 yards of total offense.  This is part of the season Coach Sanders and the Lions have been waiting for.

• Oklahoma is not out of the race to make the four-team playoff.

It’s the first weekend in October and OU has a loss.  But so does Oregon.  And so does Alabama.  And so many other teams.  Last weekend was full of big matchups between ranked teams.  If the Sooners (now 4-1 after the 37-33 loss to No. 25 TCU) run the table and finish the season with just this one loss, and against a ranked team at that, their chances are still very good to be playing in the first playoff bracket.  The season will play itself out, so Sooner fans and national media shouldn’t write an OU obit for 2014 just yet.
Have the discussion if there is a second loss.

McClendon is playing in the panhandle, so you’re not likely to hear about him from too many sources, but you will here and he is piling up numbers.  Through five games, the junior has 639 yards rushing on 77 carries.  He is rattling off 8.3 yards per carry.  That’s pretty close to a first down every time he touches the ball.  McClendon came up just shy of 1,000 yards in 2013, but there is little reason to think he won’t break the 1,000-yard mark this year.  He has surpassed 100 yards in four games in 2014.  McClendon also has 11 receptions for 99 yards.

• Central isn’t halfway through the schedule and has matched the win total of the previous two years combined.

This looks to be the season that UCO coach Nick Bobeck has been building toward.  The NCAA sanctions are now a thing of the past.  The players that have been redshirted are starting to see significant action.  And the depth and experience of the 2014 Bronchos is starting to show.  Chalk up the one loss (which was to the top-ranked and defending national champion Northwest Missouri) as a measuring stick to how much more this team needs to grow.  But the defense has been shining and in the 49-0 shutout of Nebraska-Kearney, Cody Jones gathered in his fourth interception of the year as well as his second INT return for a touchdown.  And the young Broncho offense is showing itself strong, too.

• It is unlikely that an Oklahoma school will go winless in 2014.

The list of candidates is down to just two – Northeastern State and Southern Nazarene, both at 0-5.  NSU fell big to Northwest Missouri on Saturday, the RiverHawks seem to be gained momentum with the solid play of Kevin Pantastico of late.  The four teams just ahead of NSU in the MIAA standings are a combined 5-15 and are all still to be played this season.
SNU lost 31-26 to East Central on Saturday, which is the closest game this season and second in margin of loss during the current 16-game skid the Crimson Storm is on.  And like the Northeastern State, Southern Nazarene’s schedule gets a little easier.  SNU fell to the top teams in the GAC, that have a combined record of 19-4.  The next six games feature teams in which none has a winning record this year.