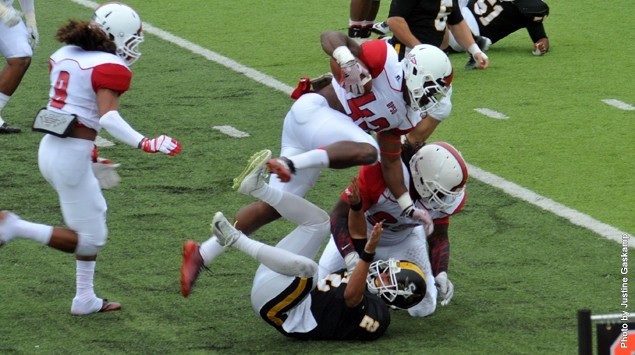 OPSU and OBU have conversation topics, while OU has been taken out of the conversation, as some of the five things we can talk about following Saturday’s games.

Oklahoma Panhandle put 37 on the board in Saturday’s win over Bacone and now has 316 points on season.  It marks the third time in school history the Aggies have amassed 300 points in a season and it is quickest a group from Goodwell has been able to get there, reaching this point in only seven games.  OPSU scored a total of 311 last year and crossed the 300-point plateau in its 11th and final game.  The Aggies went 9-2 in 1961, scoring 343 that year – the most in team history – and topped 300 points in their ninth game.

East Central continues its run of wins over rivals from the Sooner State.  The win streak is up to eight after the Tigers ran away with the 67-7 victory over Northwestern in Alva.  East Central’s defense exerted itself, giving up only 120 yards of total offense and only one score.  The Tiger defense, and linebacker Cole Weber specifically, scored more points.  Weber recovered a blocked punt and a block field goal, each for touchdowns.  The last time ECU lost to an opponent from Oklahoma was Sept. 15, 2012, falling 13-10 to SWOSU at Weatherford.

Southwestern came from behind with big fourth quarter rallies in each of its wins in 2014.  Southeastern turned the tables on the Bulldogs on Saturday.  SOSU trailed 24-7 entering the fourth quarter, but two Ryan Polite touchdown passes (one for 79 yards to Anthony Foster) and a two-yard touchdown run by Ronnie Green with 40 seconds left complemented solid defensive play from the Storm.  Southeastern scored 21 unanswered in the final quarter to come away with a big 28-24 win in Weatherford.

• Bison are on the cusp of winning season

Oklahoma Baptist upped its record to 5-3 with Saturday’s 47-6 win over Haskell Indian Nations.  The Bison need only one win in their final three games to secure the first winning season for the program since 1940.  OBU went 8-2-1 that season, the final before taking a 73-year hiatus.
And, in a related story, the Bison have put up 328 points in eight games (41.0 ppg), a school record.

• Now Oklahoma is out of the discussion to make the four-team playoff.

One loss didn’t do it.  Two losses did.