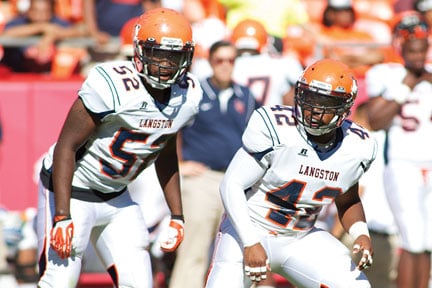 This weekend was about streaks – those teams wanted to continue, those teams did not want to continue and those that came to an end.  Here are five things to take away from Saturday’s games:

UCO can stop thinking about 2009.  That was the last time the President’s Cup was in Edmond – until now.  In front of a Homecoming crowd, Central (7-2) defeated Northeastern State, 28-10, on Saturday to stop a four-game slide against its rival.  Northeastern State made a game of it, holding the Bronchos to their second lowest rushing total of the season (110) and kept an opponent under 30 points for the first time in 2014.  But the RiverHawks fell to 0-9 on the year.  NSU has lost nine games only five times in school history, but all five have come in the last 11 seasons.

Southern Nazarene took Southwestern to overtime on Saturday, before succumbing, 27-24, in the extra session.  SNU tied the game with less than two minutes left on Lorenzo Alexander’s 1-yard TD run.  Then Ross Moore connected on a field goal for the first time in his career and it was just the first made FG for the Storm this season.  But Karl Hodge took the first Southwestern play in overtime 25 yards in for the score and win.  It was Hodge’s third TD of the day.
The loss is the 20th straight for the Crimson Storm.  SWOSU remains perfect against the Storm in four games in the short series.

Oklahoma Panhandle has faced Langston the third most times than any other school, behind Northwestern and Southwestern.  But the Lions (5-3) have had the Aggies’ number of late.  Langston’s 38-17 win on Saturday was the eighth straight in the series.  It also brought to a halt OPSU’s six-game winning streak, the longest for the program in 33 years.  The Lions’ defense held the Aggies (6-3) to under 37 points for the first time since Week One.

Because of the stage and the opponent, Trevor Knight’s performance in OU’s 45-31 win over Alabama in the Sugar Bowl in January is probably remembered as his greatest.  He racked up 355 yards of total offense (348 passing) on the night.  But he had a statistically better outing against Iowa State on Saturday with 376 yards of total offense.  Knight accounted for six touchdowns – passing for three and 230 yards and running in three more as part of a career-high 146 yards.  Yes, it was Iowa State, but it was a big day and a big win to set up a bigger game against Baylor this week.