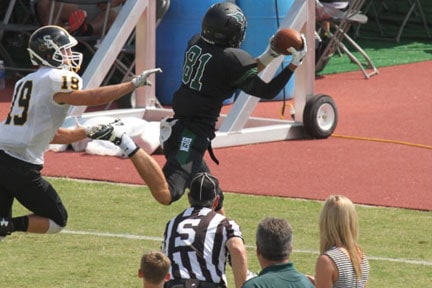 It was likely the last warm day for college football around the state, and beyond, and more things to remember about this season.

Two more Oklahoma teams joined the 400-point club this weekend and each won the seventh game of the season.
Oklahoma Panhandle put a double-nickle on Wayland Baptist with a 55-0 win in its season finale and moved the season total to 433 points.  The Aggies are 7-3 on the year and averaged 43.3 points per game.  Senior quarterback Caleb Holbrook took in the 4-yard touchdown for the score that crossed the 400-point line.
Oklahoma Baptist has also tallied more than 400 in 2014.  With one game remaining, the Bison are 7-3 after a 26-7 win over Bacone.  OBU is now at 416 on the year and reached the 400-point plateau when Blake Woodard connected with Derek Serowski for a 35-yard touchdown.

• 38 is apparently the magic number.

It’s the high water mark for the Golden Hurricane in point totals this season, and it’s the mark reached with each of the Tulsa wins as well.  TU snapped a seven-game losing streak with a 38-28 win over SMU.  Dane Evans threw for 268 yards and five touchdowns on 16-of-25 passing and was named the American Athletic Conference Offensive Player of the Week.

That’s what Langston is doing.  The Lions (6-3) are doing it to not much fanfare, but they are doing it.  Langston’s winning streak is now at five and the CSFL title was clinched with the 38-10 victory over Southwestern Assemblies of God.  Just another day at the office for Mark Wright, Jr. passing for 238 yards, and for Sheldon Augustine, who had seven receptions for 147 yards.  It will be interesting to see how the Lions move in the NAIA poll released on Tuesday.  Right now, all Langston is doing is simply all it can do – win.

• Yes, a team can have five points at the end of a game

And that’s what happened in Durant on Saturday.  Southeastern defeated Arkansas Tech, 22-5.  The numbers were out of the ordinary throughout as the halftime score and score after three quarters was 8-5.  The defensive effort intensified and it appeared the Storm was trying to keep the bases from getting loaded and allow the Wonder Boys to end the game with one swing.

Make no mistake, the SNU offense is improving.  Unfortunately, the results haven’t yet been seen in the win column.  The Crimson Storm have been ahead in the fourth quarter in two of the last three contests and tied late in the third one.  The wins will come; but it hasn’t happened yet.  Southern Nazarene fell to Northwestern, 39-29, in Alva on Saturday, and the streak is now at 21.  SNU hosts Southwest Baptist in the season finale on Nov. 15.