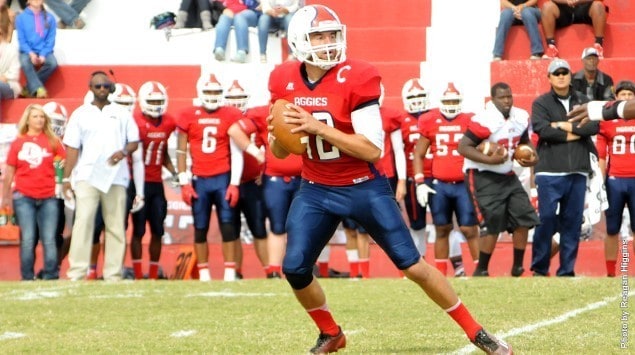 Three teams have secured winning seasons, two continue score in bunches and one team is quietly putting together a solid playoff resumé, as we look at five things to take away from the final Saturday in October of 2014.

• Piling up wins and points

Oklahoma Panhandle has clinched a winning season with 45-7 blowout of Southwestern Assemblies of God.  The Aggies are now 6-2 and on a six-game winning streak, the longest of any team in the state this year, and will have a winning record for the first time since 2010.  OPSU has also set a new scoring mark.  With a total of 361 points in eight games (45.1 ppg), the Aggies have eclipsed the total 343, set 53 years ago.  OPSU went 9-2 in 1961.
Additionally, Chris McClendon now has 945 yards rushing and topped the 100-yard mark for the sixth time in seven games.

Oklahoma Baptist assured itself a winning season as well.  The Bison shut out Texas College, 62-0, moving to 6-3 on the year.  It will be the first winning season since 1940, the last season of football at the university before the football program’s revival in 2013.  This is also the second time in 2014 in which the Bison have won back-to-back games with a combined score of 109 points.
Also, the Bison are on an amazing scoring pace.  OBU has put up 390 points in nine games, averaging 43.3 points per game, and is No. 2 in scoring in the NAIA.  The overall point total is tops in school history and continues to grow.  The previous high for an Oklahoma Baptist football team was 279, the total points for the team in 1925.  One note, however, is that the Bison scored 118 in a blowout of Murray State that year.

Central also ensured itself a record above .500 with Saturday’s 35-26 win over Washburn.  Both running back Jake Gandara and quarterback Chas Stallard topped the century mark in rushing yards as UCO had 338 on the ground Saturday afternoon.  The Bronchos are now 6-2 on the year, matching the number of victories combined in the last three years.  The six wins in the MIAA are also the most conference wins for UCO since 2008, when the Bronchos won six in the Lone Star Conference and swept all five games in the LSC North.

Langston finally got to play in front of its fans and didn’t disappoint.  In the first home game of the season, the Lions defeated Wayland Baptist, 38-7, to move to 4-3 on the season.  LU is simply and quietly getting the job done.  The Lions are now 3-0 in the CSFL with two league games to go and a matchup with OPSU next week.  Langston received votes in last week’s NAIA football poll and should be in the top 25 this week.  If the Lions win out and goes 7-3 – which would mean going undefeated against NAIA and two wins against D-II schools – it is tough to come up with a legitimate scenario in which they do not make it into the postseason.

It’s been six years since this had last happened, but with Southeastern’s 45-7 homecoming win over Northwestern, the Savage Storm have put together a four-game winning streak.  In 2008, SOSU closed the season with four straight to go 6-5 on the year.  It was also the last time the Storm won three straight conference games, then in the Lone Star Conference.  This is the also the latest in a season Southeastern has had a winning record in league play since joining the GAC.