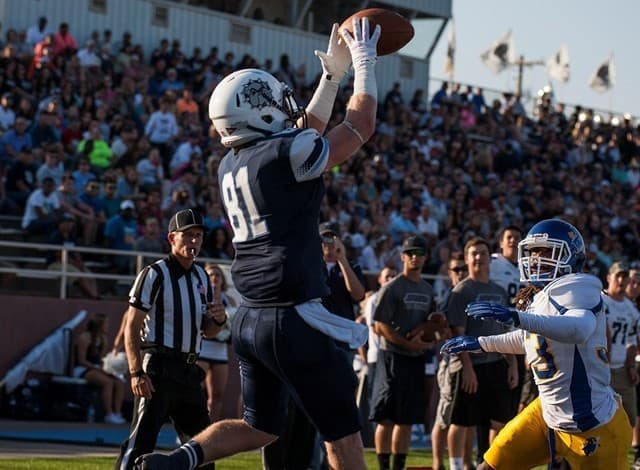 A big September Saturday provided one intrastate matchup and lots of action.

• Don’t give up on Southwestern, even if the Dawgs are down in the fourth quarter.

The Bulldogs trailed Southern Arkansas, 24-13, with just more than nine minutes remaining when for the second consecutive week, Steven Townsley had a game changing play on defense.  The senior defensive back picked up a fumble forced by linebacker Tanner Thompson and took it 49 yards to the 3-yard line.  Karl Hodge took it the rest of the way for the score on the next play.
The Dawgs’ defense held the Muleriders to a three-and-out on the ensuing possession and backup quarterback Tim Morovick led the team 40 yards for the go-ahead score.  Matt Farris took the ball in from one yard out and SWOSU is now 2-1 after another huge late game comeback.

• Solid defensive play has Central off to its best start in 10 years.

The Bronchos gave up nearly 400 yards to the strong Emporia State offense, but didn’t give up points accordingly.  UCO won 24-14 and the Hornets only offensive score came with just less than three minutes remaining in the contest.
Central has held its opponents to 12.7 ppg in starting the season 3-0 for the first time since 2004.  ESU’s first score came on a punt return in the first quarter.  The Hornets had a first-and-goal situation twice without converting.  Cody Jones intercepted Hornets’ QB Brent Wilson in the UCO endzone and Levonte Douglas returned a fumble a school record 99 yards for a score.

• The Sooner backfield is scary impressive.

Keith Ford led the Sooners with 194 yard rushing in three games, but suffered a leg injury against Tennessee and wasn’t available against West Virginia on Saturday.  No worries.  Freshman Samaje Perine passed that in one game, carrying the ball for 242 yards on 34 carries.  He also recorded four touchdowns.
Perine’s teammate in the backfield had 56 yards on eight rushes, and gave his team a big boost with a 100-yard kickoff return just before the half to tie the game at 24 apiece.  The Sooners won 45-33 in Morgantown, W.V.  Ford won’t be forgotten and may be back this season, but may not be missed.
Is anyone missing Joe Mixon about now?  Cue the crickets.

• Oklahoma Panhandle racked up more than 700 yards as the Aggies handed OBU its first loss.

The Aggies surpassed their scoring from the first two games in the third game of the season as the offense really caught fire.  Oklahoma Panhandle beat Oklahoma Baptist 49-21.  OPSU followed a Bison punt returned for a touchdown with 35 consecutive points to take control.  Chris McClendon put up 169 on 20 carries and touchdown.  Caleb Holbrook found 12 different receivers as he threw for 390 yards and four TDs.  Devyn Williams had five receptions for 129 yards and two scores and Zacari Lavender caught five as well for 110 yards and a score.

• Hometown freshman Hooper’s first start at QB for Northwestern was a memorable one.

Former Alva Goldbug Ty Hooper completed 77 percent of his passes in his Ranger debut and led NWOSU to its first win in 2014, 34-28 over Arkansas-Monticello.  He was 10-of 13 for 149 yards and a touchdown.  Tailback Jarion Tudman led the Rangers with 81 yards and two touchdowns.  The game went back and forth and UAM took a 28-27 lead with 2:32 remaining.  Hooper was 3-of-3 passing as he took the Rangers 75 yards on their final drive.  Tudman took the ball in from five yards out to complete the comeback