Five things to look for in today’s games 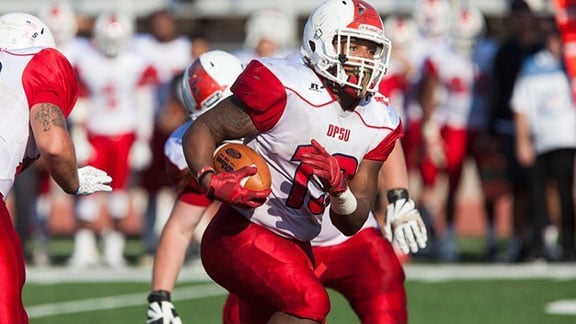 Here are five things to look for as college football heads into late October:

Southwestern hosts Oklahoma Baptist today. The Bulldogs have looked like two different teams of late. The question is which team will show up in Shawnee. Junior quarterback Marc Evans is the key. When Evans is on (31-of-46 for 365 yards, 4 TDs, 0 Int. in a win over No. 19 Ouachita) things are good. When he is not (23-of-42 for 178 yards, 0 TDs, 5 Int. the next week in a loss at Henderson State) things are not. It’s been a storyline through the season. OBU is proving it can make a little noise in the GAC this year. The Bulldogs have won two straight and need the good Evans today to make it three.

It’s a rivalry game in Muskogee today as Langston heads to town to take on Bacone. The Lions are coming off a 23-20 win over Southwestern Assemblies of God. It’s a good win, but not the style the Lions wanted, coming from behind to rally in the fourth quarter. Considering the head coach, Quinton Morgan, was put into that interim position the day before, it’s really not bad. But now the Lions have a week to prepare for an opponent under the new administration. Langston needs a win to get back above .500 and put itself back into a position for an outside possibility at a playoffs spot. If Langston can earn a win against 1-6 Bacone today, can the Lions do it in such a way to start regaining some national attention?

Clay McKenzie is solid running back for the Bronchos, but he wasn’t slated to be the starter this season. Then Jake Gandara suffered an injury in the first week. Cue the McKenzie era in the UCO backfield. The sophomore definitely made the most of his opportunity. McKenzie has 742 yards through seven games with an average of 6.0 yards per carry. He brings a streak of three straight games of 100-plus rushing yards with a touchdown in each one. Central is in Topeka, Kan., today to take on an Ichabod defense that is fourth in the MIAA against the rush. A fourth straight game in which McKenzie crosses the century mark rushing will go a long way toward a win.

This is a preview of what Oklahoma Panhandle will be seeing in upcoming years as the Aggies are headed into the Lone Star Conference as an affiliate member in football. OPSU lost the season opener at No. 12 Angelo State, but Tarleton State comes in with just one win on the season. Both offenses have shown the potential to light it up. OPSU is scoring at a clip of 42.0 points per game, and while TSU is putting up 33.3 ppg, the Texans are giving up 49.3. It could be a wild day in Stephenville. The TSU defense is also allowing 294 rushing yards, which could make for a big day for Chris McClendon.

The matchup between Southern Nazarene and Northwestern marks the longest ongoing rivalry for the Crimson Storm. SNU has won only once against NWOSU in 11 tries, and that was due to a forfeit. To say the Crimson Storm is due is an understatement, wanting to stop a series streak of 11 losses and an overall streak that is now at 29. Northwestern won last year, 39-29. But the Rangers are going to have recover from a breakdown in last week’s game with five interceptions – two that were returned for touchdowns – were a major part of the loss to OBU. Both teams are making corrections and one will come away with a win today that could a positive effect long term for the program. Which team will this be the time for today?