Five things to take away from college football this weekend 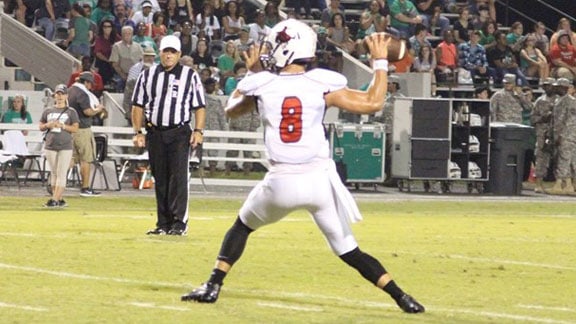 The first weekend of college football games for Oklahoma schools is in the books. Here are five things to take away from their openers.

• McClendon picked up where he left off.

Oklahoma Panhandle lost at Angelo State, 52-31, on Thursday. But the Rams are probably happy Chris McClendon will have graduated by the time the Aggies start playing a full Lone Star Conference schedule.
McClendon rushed for 138 yards and two touchdowns. He picked up 8.1 yards per carry on 17 rushes. And with receptions and returns, McClendon had 192 all-purpose yards.
The Aggies have only four home games this year, but OPSU fans should get out to watch them each chance they get.

With the rule changes to points after touchdowns in the NFL, it might be assumed that the extra point is automatic. A couple of Oklahoma school found out this weekend that this isn’t the case. And it cost them.

In the third quarter against Harding on Saturday, Oklahoma Baptist missed an extra point on its second touchdown of the game. Without the PAT, the score was still tied at 13, because HU had missed an attempt as well. But it would have given OBU a lead of 14-13. Instead, without that point, the game was tied at the end of regulation. OBU also missed a field goal attempt right before OT, too. And in the extra period, OBU scored on its first possession, but again missed the PAT. Harding scored and tacked on the extra point to win 20-19. It was a heartbreaking way to lose against a Top 25 opponent in the first game for the Bison in D-II.

Langston also faced a D-II opponent, and like Oklahoma Baptist matched its competition with touchdowns scored. Both the Lions and the Lincoln Blue Tigers scored five touchdowns, but Langston missed its extra point attempt on its second touchdown and fell further behind trying to making up ground on two-point conversion attempt and not converting. Langston lost 35-32.

The PAT may seem like a formality at times, but it sure isn’t.

Turn on the radio or watch on twitter and the wave of discontent about the way OU and OSU won their games this week is there.

Oklahoma State beat Central Michigan, 24-13. But it wasn’t a good enough win. Oklahoma’s offense was stagnant for more than a quarter, but it finally got going in a 41-3 win over Akron.

“But they (pick whichever team) didn’t play well enough. OK, that’s probably true. But each did win its game. And don’t think the flaws displayed were lost on the coaching staff of each team. The issues will get worked out or there will be problems against stronger teams, for sure.

In the mean time, enjoy the win. It doesn’t matter how many stats a team is better than another or how much one team dominated another, if the final score doesn’t reflect that.

• Don’t take your eyes off Augustine.

Langston came up short on the scoreboard against Lincoln. But it was a solid day for Lion senior Sheldon Augustine.

When Lincoln got its first touchdown, Augustine made sure his team was right back in it, as he returned the ensuing kickoff 100 yards for the score. Augustine also had a team-high six receptions for 43 yards and with his other return yards compiled 184 all-purpose on the day.

It might have been easy for the Northwestern Rangers to get their heads down early on Thursday night at Arkansas-Monticello.

The Rangers ran eight plays in the first quarter, which included four incomplete passes and a fumble. The Weevils scored just before the end of the period to go up, 17-0. NWOSU had lost its previous five season openers and looked to headed toward a sixth.

But the Rangers didn’t get down and came back with a 31-point second quarter, with four touchdowns and a Will Hawkins field goal. Three of Reid Miller’s five touchdown passes came in that stanza and the Rangers never looked back, en route to a 52-31 win.

Even in Week One, always keep your head up. Ride Ranger, ride.