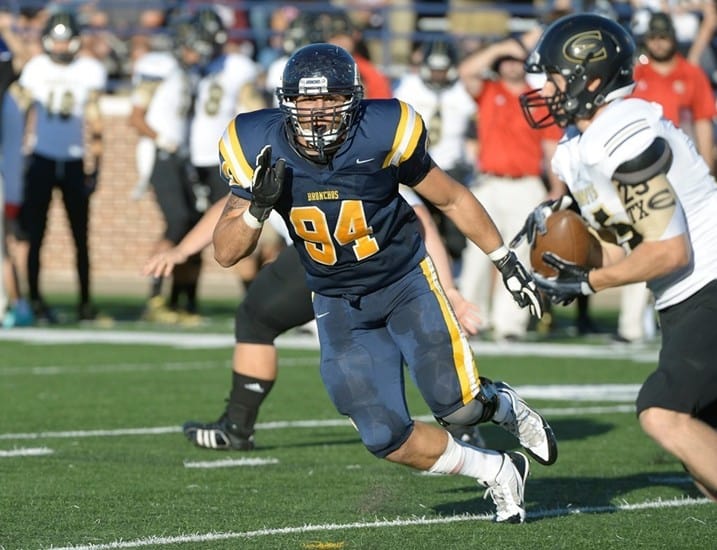 The final weekend of the regular season for Division II and NAIA saw some happy endings for some and for others, just … endings.  Here are five things that stand out.

The only way for Langston is up.  The Lions defeated Bacone, 27-14, in the inaugural Oklahoma City Classic to finish an undefeated run through the Central States Football League.  At 7-3 and on a six-game winning streak, LU will surely not drop in the new NAIA poll – currently sitting at No. 17 – and will likely move up.  Among the criteria to secure a playoff spot are winning the league crown and finishing in the top 20.  Check.  And check.

There’s no question it wasn’t the finish UCO wanted – a 41-14 loss to Pitt State.  However, the cumulative results of the season have resulted in the payoff.  Central has accepted an invitation to play in the Mineral Water Bowl in Excelsior Springs, Mo.  The Bronchos will face Sioux Falls University on Saturday, Dec. 6.
Central finished third in the MIAA, which is a far cry from the 10th and 11th place finishes the Bronchos were slated to have according to the preseason league polls.
Additionally, Jake Gandara crossed the 1,000 yard mark with 103 yards rushing and scored both touchdowns.

46-46-6.  The series record is as even as it gets between Southeastern and East Central and that’s the way a rivalry ought to be.  The best small college rivalry in Oklahoma, as it is billed, took on the additional title of the Great American Classic this weekend.  SOSU stopped a four-game slide against ECU with an 18-15 win in Ada.  The Savage Storm held on for the three-point victory by blocking not one, but two field goal attempts at the end.  SOSU blocked a 38-yard attempt with five seconds left, but was penalized for running into the kicker.  The Storm then blocked a 33-yard attempt for preserve the win.

This column suggested at the mid-point in the season that no college team in the state would have a winless season.
This column was wrong.
Southern Nazarene made it painfully close in each of its last four games, but came up short each time, the last one a 20-14 loss to Southwest Baptist.  The season ends at 0-11 for the second consecutive year and the losing streak carries into 2015 at 22.
Northeastern State dropped its finale at home to Lindenwood, 35-16  It is the first time in school history to have 11 losses and first winless season since 2004.  In six of the last 11 seasons, the RiverHawks have lost at least eight games.
· Random fact: Each team connected only once on a field goal attempt for the entire season – SNU 1-of-2, NSU 1-of-7.