Five things you need to know about … the Game of the Day: OBU at MACU 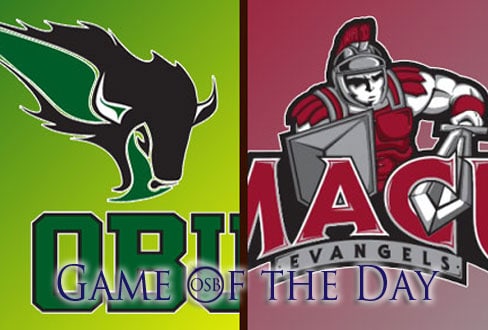 It should be a good one tonight in south Oklahoma City as the Game of the Day has No. 4 Oklahoma Baptist on the road to face Mid-America Christian.

◊ Winning streaks are on the line tonight as OBU brings in the state’s longest current streak at 12.  MACU has also put together a modest three-game winning streak of its own.

◊ The Lady Evangels want to get losing streaks out of their systems as well.  MACU has lost six straight to the Lady Bison, dating back to February 2011.  Additionally, the five-game losing streak MACU suffered through in January began with the most recent loss, a 96-64 setback in Shawnee.

◊ In the last 12 games for OBU – all wins – 11 have been in Sooner Athletic Conference,  and the Lady Bison have beaten every other SAC team at least once this season.  OBU has also had two players earn weekly SAC honors in this time.  Charity Fowler is the current Player of the Week and Jalissa Council has been tabbed POW twice.

◊ The player MACU may have to watch most closely is Council.  She is leading the NAIA in field goal percentage – an amazing 60.1 percent – and is averaging 20.0 points per game during the games in which she has played during OBU’s streak.
Ashlee Ferguson is putting in 15.2 points per game for the Lady Evangels in SAC play.