Five things you need to know about … Today’s Game of the Day: MACU at SGU 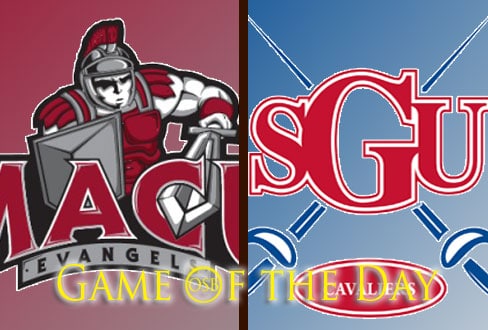 ♦ This marks only the second time these schools with both ranked in the top 25.  The previous time this happened was just 28 days ago when the rankings were almost exactly reversed.  SGU came in at No. 17 and MACU was ranked No. 22.  The two teams were tied for second place in the SAC then; they are tied for third place in the league coming into today.  Neither can win the regular season league title, but second place is still in reach.
Additionally, both schools have reached their highest national rankings this season.  MACU was ranked as high as No. 14 for two weeks (Feb. 4, 11) and SGU climbed to No. 11 the week of Jan. 14.

♦ MACU won that previous contest, 89-78.  Jarius Wilson led the way for the Evangels with a game high 25 points, going 4-of-5 from long range. SGU’s T.J. Thornton had 21 points and Josiah Campbell recorded a double-double with 11 points and 13 boards.  The Evangels led by double digits midway through the second half, but St. Gregory’s came back to take a four-point lead with 3:30 left.  MACU then outscored the Cavs 18-5 to finish the game and grab the win.

♦ The Evangels’ win over SGU came in the midst of a five-game winning streak. The four games to follow that have all been MACU losses, including a brutal 75-74 loss to John Brown on Thursday night on a four-point play by the Golden Eagles with 2.3 seconds left.  Offense hasn’t abandoned the Evangels during the skid.  MACU is averaging 90 points per game on the year and Semar Farris is 19th in the country in scoring at 19.7 ppg himself.  The junior continues to lead his team in scoring, assists and steals and is the only player in the top five in the SAC in each of those categories.

♦ SGU comes in on the strength of an 87-78 rivalry win over Oklahoma Baptist on Thursday night.  Marty Wilkerson has dropped off his torrid scoring pace from earlier in the season, but is still putting in a very respectable 21.0 ppg and is 11th in the NAIA in that category.  Campbell continues to rebound well and is sixth in the country with 10.5 per game and is averaging a double-double for the season, with seven individual games logging double-doubles.

♦ St. Gregory’s needs one win to match the program’s record high for a season at 20.  With three games remaining on the regular season schedule, each of the teams left have beaten the Cavs this season – MACU, SAGU and Northwood.  The 10 conference wins SGU has already is a new high mark.