Five things you need to know about … Today’s Game of the Day: OBU/OCU – The Rematch 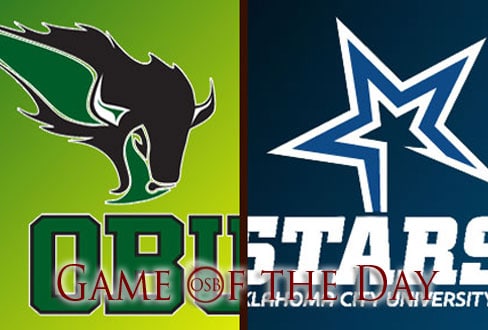 It’s a huge game in OKC today as two of the top teams in the NAIA go at it in the final game of the regular season with a conference title on the line.  No. 5 Oklahoma City hosts No. 6 Oklahoma Baptist at 3 p.m. in Abe Lemons Arena.

♦ This is a rematch of a classic in Shawnee back on Jan. 16, when both were ranked in the top five and the game was the NAIA’s pick for Game of the Week.  OBU trailed by 16 at halftime, but stampeded back to defeat the Stars, 85-79.  Lady Bison senior Jalissa Council had one of the biggest games of her career with 31 points.  Autumn Lau led the way for the Stars, as the she went 5-of-7 from behind the arc and had 28 points on the day.

♦ Lau is finishing the season on a strong note.  The senior has seven double-doubles on the year, five of them since the OBU loss,  and has scored in double figures in four of the last five games.  Lau is leading the team in rebounds (8.2 rpg) and blocks (25) and second in scoring (13.5 ppg).

♦ Today’s game could be won or lost on the glass.  Both teams are in the top 10 in the country when it comes to rebounding.  OBU is No. 10 is corralling the ball, bringing in 44.66 per game.  OCU keeps its opponents off the board and is ninth in the country giving up only 33.26 rebounds per game.

♦ OCU and OBU have won or shared the SAC regular season title each year since 2007-2008 and this year it will be one of the two to claim the crown again.  The Stars last won outright last year going unscathed (16-0) through the league.  OBU’s last outright title came in 2008-2009 when the Lady Bison went 20-2 in the SAC.