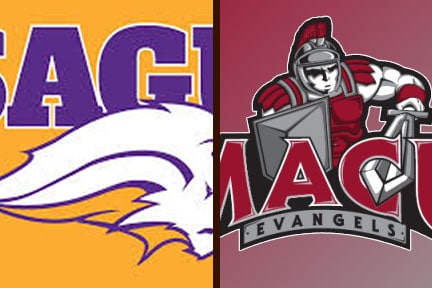 With much respect to Bedlam, we went a different direction today.  It’s a matchup of top 15 teams as No. 5 Southwestern Assemblies of God (21-3) travels to south Oklahoma City to take on No. 14 Mid-America Christian (14-7) in our Game of the Day.

♦ SAGU is 13-2 in the Sooner Athletic Conference, MACU is 10-5, and counting today’s game, each have five games remaining.  SAGU win would virtually give the Lions the SAC regular season title with a four-game lead and four games left to win only one.  With a win, MACU stays within two games of the top, but still would have an uphill climb and need help to the league title.

♦ The teams have split in their last two meetings.  SAGU won, 82-77, back in January in the first meeting of the programs as SAC rivals.  But MACU won a post season matchup in 2011 when the Evangels defeated the Lions, 102-98, in the Central Region quarterfinals of National Christian College Athletics Association tournament.

♦ Both teams believe in the getting a second chance – to score that is.  SAGU is fifth in the NAIA in offensive rebounds per game at 15.17.  But MACU is not far behind that, corralling 13.38 per game.

♦ The Evangels are putting up plenty of points each outing, scoring at a clip of 90.5 points per game.  MACU has scored 89-plus points in 15 of 21 games this season.  Leading the way for the Evangels are Semar Farris, 20th in the country in scoring at 19.52 ppg, and Angelo Lewis, 52nd in the country with 16.76 ppg.  Jarius Wilson and Reggie Davis are also scoring in double figures for MACU. Dominique Rambo, a senior transfer from OKWU, is one of four Lions scoring in double figures, starting 2014 with a 40-point outburst against OBU and averaging 22.44.  Rambo’s backcourt partner, fellow senior and transfer from OKWU, Chris “Hondo” Gentry, along with Jonathan Walter and Caleb Feemster are also putting in double figure scoring averages.

♦ The Evangels are trying to rebound from a tough night Thursday, falling 115-87 at Northwood.  It was the worst loss for MACU since Jan. 15, 2011, when they fell by 28 to Southern Nazarene.  MACU has lost two straight after five consecutive wins.
The Lions came from behind to win at home over OBU, 69-61, on Thursday.  Back-to-back wins for SAGU put them at 5-2 to follow an 11-game winning streak.