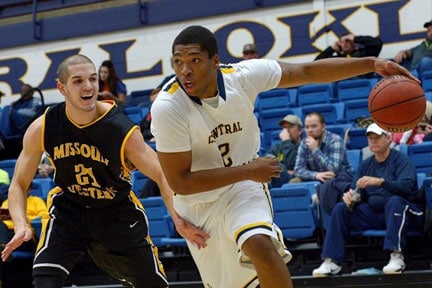 There is a lot of basketball on tap for a Thursday night.  Here are a few things to get you ready to watch and listen tonight.

• Oklahoma Baptist brings in the longest winning streak in the state at seven straight victories. OBU will try to make it eight on the one-mile journey down the road to St. Gregory’s to play Round One of the 2014 Holy War.  At No. 5 in the country this week, it’s the highest ranking for the Lady Bison since 2010.

• Central’s Josh Gibbs ranks second in Division II with 13 double-doubles.  UCO is on the road to take on Washburn, a team the Bronchos have beaten three straight times, looking for the 12th win of the season and sixth in the MIAA.

• Oklahoma City may have dropped in the NAIA poll this week, but not far.  The No. 7 ranked Stars have been in the top 10 in every poll since Mar. 11, 2009.  OCU hosts Texas Wesleyan to try to build a new streak, following a win on Saturday, which put the new SAC win streak at one.

• St. Gregory’s junior Marty Wilkerson is second in scoring at 24.2 points per game, but by just 0.2 points.  After losing two games last week, the No. 11 Cavs got back on the winning track with a 102-99 win over No. 24 Wayland Baptist in the first of three games this week.

• Tulsa has won four of its last five games and has won its last six games at the Donald W. Reynolds Center, which is where the men will be tonight.  The Golden Hurricane hosts the Middle Tennessee Blue Raiders in the first-ever meeting between the schools.