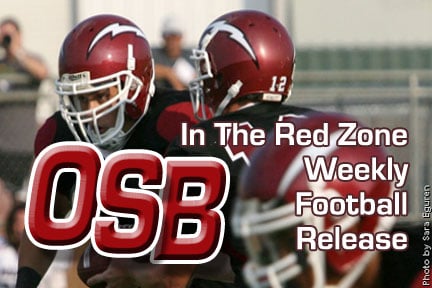 Oklahoma State found a way to win on the biggest stage it has seen in a while (if ever).
Southern Nazarene continues to dominate any team in its path with conference play looming.
Oklahoma won at home (again) and still dropped to No.2 in the AP Poll.
The best small college rivalry in the state was won by the home team as East Central kept Southeastern from having a third straight come-from-behind victory.
And Northwestern won for the first time while Panhandle State is still in search of that first win.

SNU’s Derick Perkins (receiving the handoff) is in our featured picture for the post and honored in our weekly release.  Find out more about some great individual performances inside.