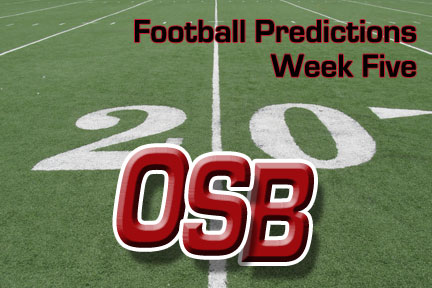 Ball State at Oklahoma
Ball State is a decent team, but they till have a way to go before they’re able to know off the Sooners in Norman.
Matt’s Pick: OU 42, BSU 17
If last week’s game against Mizzou was a letdown game after the Florida St. contest, this week is a letdown-letdown game.  Don’t be fooled, though.  The Sooners will come out ready to play.  Expect to hear a lot of names called in this one that you are unfamiliar with as Stoops unloads the bench in the second half.
Joey’s Pick: OU 59, BSU 14

North Texas at Tulsa
The Golden Hurricane wins big in this one.  After a tough start to the season, Tulsa gets it rolling against the Mean Green.
Matt’s Pick: TU 55, UNT 23
What?  No Top 10 team this week for Tulsa to face?!  Well, then.  I’m going with the Golden Hurricane.
Joey’s Pick: TU 56, UNT 28
Central at East Central
The Tigers are getting stronger each week and are at home again for this one.  Central’s independent schedule was definitely front-loaded with some tough ones, and it doesn’t slack off much here.  ECU took out former OIC & LSC rival Northeastern two weeks ago and will do the same to another former OIC and LSC rival.
Joey’s Pick: ECU 34, UCO 21
Southwestern at Southeastern
Bulldogs go on the road and pick up the win.
Matt’s Pick: SWOSU 35, SOSU 28

Langston at Bacone
It’s the first CSFL game for both teams and they’re both likely ready to start playing some competition against programs close to the same size as they are.  The Lions started off surprisingly well, but have since taken a couple of tough losses against MIAA schools.  Bacone doesn’t have the same stuff on defense that the D-II schools do.  Langston picks up the conference win.
Joey’s Pick: LU 49, BC 13

Missouri S&T at Northwestern
This one is the Miners’ 999th game in its program history.  If it was going to be played in Rolla, I’d give them the advantage.  But since Northwestern finally was able to remove the goose egg from the win column last week, give the (slight) advantage to the Rangers in Alva.
Joey’s Pick: NWOSU 21, MS&T 20

Southwestern Assemblies of God at Southern Nazarene
I picked the Crimson Storm to go 9-2 in the regular season this year.  I may have underestimated them. SAGU has won three straight and has a tough defense.  It won’t be enough in Bethany. The margin of victory may be smaller for the Storm than in recent weeks, but it’s still a margin of victory.
Joey’s Pick: SNU 34, SAGU 21