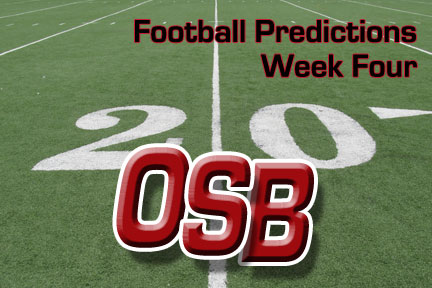 Missouri at Oklahoma
OU rolls at home.  With Jarvis Jones back as the starting right tackle, Landry Jones will have all day to pick apart the Tigers’ defense.
Matt’s Pick: OU 48, MU 17
The Sooners say that this isn’t a “revenge” game, but there must be memories of Faurot Field in the players’ minds.  Actually, that should be a positive for Oklahoma in that it keeps the team focused and won’t allow for a letdown after the big game last weekend.  The Sooners’ defense continues to impress.
Joey’s Pick: OU 45, MU 21

Oklahoma St. at Texas A&M
A&M will be tough at home and both teams will score a lot of points.  I think the Aggies will have just a little more offense.  College Station is a tough place to play and this should be a great game to watch.
Matt’s Pick: A&M 49, OSU 48
This has become a tightly-contested game.  It’s a shame that this rivalry that has just started to grow between the two will likely go away after this season.  The Pokes need this to really establish their worthiness in the Top 10.  OSU’s offense is just too much here, but I don’t expect the game to be over early.
Joey’s Pick: OSU 49, A&M 38

Tulsa at Boise St.
Tulsa keeps it going with their ground game, but Boise State at home is just too much.  Broncos roll in this one.
Matt’s Pick: BSU 49, TU 24
It’s tough to imagine playing three Top 10 teams in four games.  The Golden Hurricane loses again, but look out Conference USA when this streak of games is over.
Joey’s Pick: BSU 56, TU 28

Central at Southwestern
Last weekend’s victory over Henderson State was huge.  And it was a big statement for the Bulldogs’ defense.  Josh Birmingham will have to bring his “A Game” and have some help if the Bronchos are going to be able to stay in this one.
Joey’s Pick: SWOSU 30, UCO 27

Southeastern at East Central
The Savage Storm is on a roll and they have a chance to knock of the Tigers in Ada.  Southeastern will rely on its ground game to win this one.
Matt’s Pick: SOSU 36, ECU 19

Panhandle St. at Northeastern
The two teams have had a rough start to 2011. I’ll go with the Riverhawks at home
Joey’s Pick: NSU 42, OPSU 20

Bacone at Texas-San Antonio
After picking up their first win of the year, the Warriors have to go on the road to Division I UTSA.  It’s a brand new program, but as NSU found out, they’re pretty tough at home.
Joey’s Pick: UTSA 63, BC 10

Langston at Emporia St.
I’m really tired of picking against Langston.  So I won’t this week.  The Lions road trip has taken them from Arkansas to Alabama to Missouri and now to Kansas.  Expect Langston to go to 3-1 after today.
Joey’s Pick: LU 35, ESU 29

Southern Nazarene at Bethel
The Crimson Storm is on a roll and continues the nonconference schedule with ease.  Wardlaw and the Storm offense should have another field day.
Joey’s Pick: SNU 56, BC 14