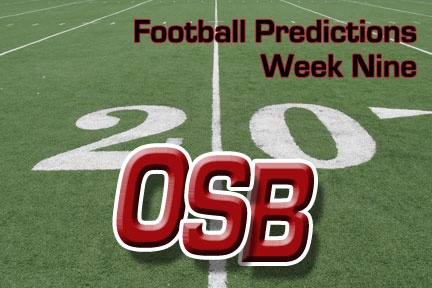 Well, the OSB Staff actually made predictions over the last two weeks; those picks just didn’t manage to make it online.  OK, at least we can give you last week’s records.  And no, neither of us picked Texas Tech, so we won’t try to fool anyone into thinking we knew something.  I don’t think anyone but Tuberville saw that coming.
Last week:  Joey > 8-2; Matt > 2-2
Overall: Joey > 56-17; Matt > 18-8
And here we go…

No. 9 Oklahoma at Kansas State
I know it’s a home pick but Stoops has a way of rallying the troops after an unexpected loss.  The Sooners have more talent but will probably be out coached on Saturday.  This one comes down to defense and I believe the Sooners right the ship and pull out the win.
Matt’s Pick: OU 42, KSU 38
This game will likely not get the weekend hype it would have if both teams were undefeated.  But it’s still big.  This is where KSU gets separated from the two Oklahoma schools.  It should be nice for the Wildcats this season.  They will finish third in the Big 12, but no higher.  The Sooners get back on track in Manhattan.
Joey’s Pick: OU 42, KSU 29

Baylor at No. 3 Oklahoma St.
Robert Griffin III will put up big numbers but the Cowboys are one of the hottest teams in college football right now.  I have Oklahoma State winning big in this one.
Matt’s Pick: OSU 52, BU 28
Sure, Griffin is good.  That’s not to be denied in this column.  But the Bears can’t outshoot the Cowboys.  And the OSU defense gets more fired each week.  Homecoming will be fun for the Pokes.
Joey’s Pick: OSU 55, BU 28

SMU at Tulsa
Tulsa is on a roll right now and G.J. Kinne is putting up some very impressive numbers.  If the Golden Hurricane defense can continue to create turnovers, the match up with Houston on Nov. 26 could be very interesting.
Matt’s Pick: TU 37, SMU 24
Two of the smallest schools (at least in enrollment) in the FBS meet in Tulsa.  The Golden Hurricane continues to roll against a quality opponent in SMU.  Like OSU, the offense has been highlighted, but the defense has been stepping up.
Joey’s Pick: TU 31, SMU 20

Black Hills St. at Central
Neither team is having a season it wants to remember.  Give the edge to the Bronchos for three reasons: 1. They are at home.  2. I picked them to win four games this season and that means they have to win here.  3. The Black Hills State game notes have “Edmund” spelled wrong.
Joey’s Pick: UCO 24, BHSU 23

East Central at Arkansas Tech
It’s a pretty evenly matched contest in Russellville.  A slight edge goes to Vanderzee and his senior leadership.  If the defense doesn’t give up any big plays, the Tigers should control this one.
Joey’s Pick: ECU 38, ATU 21

Southwestern at Northeastern State
Series don’t get any tighter than this one.  Coming into it’s 80th meeting (and 79th consecutive year) between the two schools, SWOSU and NSU are deadlocked at 38-38-3.  It is an incredible shame that conference realignment will force this series to be put on the shelf.
Go ahead and give the Riverhawks the edge.  They have been playing really well against Great American Conference schools.  The MIAA schedule they’ll face next year won’t be as pleasant.
Joey’s Pick: NSU 42, SWOSU 30

No. 20 Southern Nazarene at Panhandle St.
After a rougher-than-expected (at least for this prognosticator) the Aggies finally found their winning ways.  But the next two weeks get really tough again.  I’ll take Wardlaw over Lauchland this week as the Crimson Storm offense will be too much to handle.
Joey’s Pick: SNU 45, OPSU 28

Southeastern at Arkansas-Monticello
The Savage Storm has been struggling and has lost five in a row going into Saturday.  Arkansas-Monticello is facing it’s own struggles this year but they are at home for this one.  I think home field advantage will be the deciding factor in this game.
Matt’s Pick: ATU 28, SOSU 14

Bacone at Texas College
I picked Bacone to win three games in 2011.  This week, they get that done against the Steers.  They’ll need to – the final two weeks look pretty tough.
Joey’s Pick: BC 35, TC 14

Southwestern Assemblies of God at Northwestern
The Rangers have slipped up in the last couple of weeks – Bacone was a surprise, Langston wasn’t.  NWOSU gets it going and above .500 again in the CSFL with a win in the final game in Alva this season.
Joey’s Pick: NWOSU 42, SAGU 19