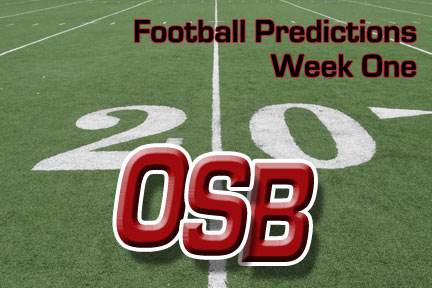 Game Week is here and we here at OSB are ready for football to get started!  So here we go. Two games are getting things going tonight.

Central Oklahoma at North Alabama
Central is going to have a better season in 2011, but this is a tough way to start it.  The North Alabama Lions have won their last eight season openers, and this one is in Florence.  The Bronchos had better get their pass defense on or UNA senior QB Lee Chapple is going to have a fun night through the air.  North Alabama is No. 6 in the preseason and they will look to keep that ranking intact.
Joey’s Pick: UNA 38, UCO 14

Southwestern at Northwestern
The accolades are all there for the Rangers in the preseason.  They’re picked to win the CSFL ,,, again.  Northwestern is also No. 13 in the NAIA poll.  But the Bulldogs have a bone to pick (did I just write that?) with the boys from Alva.  With lots of returning starters (16) and what looks to be a strong defense, Southwestern is in position to make some noise in 2011.  That noise will have to wait a week.
Joey’s pick: NWOSU 24, SWOSU 17

Tulsa at Oklahoma
The Sooners are too much at home and the Golden Hurricane won’t have Damaris Johnson.
Matt’s Pick: OU 42, TU 14
If there was anything that Tulsa coach Bill Blankenship didn’t need when preparing to take his team into Norman to open the season, it was the knowledge that he would do it without one the best receivers in the state (country), and no, I’m not talking about Broyles or Blackmon.  Damaris Johnson also happens to be one of the best return men in NCAA history, and special teams has been an area suspect for the Sooners in recent years.With or without Johnson though, Oklahoma is the better of these two high-powered offenses.
Joey’s Pick: OU 48, TU 27

Louisiana at Oklahoma State
Cowboys’ offense will be hitting on all cylinders coming out of the gate.  ULL just won’t have the firepower.
Matt’s Pick: OSU 55, ULL 10
The Ragin’ Cajuns played it close last year for first half in Lafayette.
Too much orange in Stillwater.  Too much Weeden2Blackmon.  Too much improvement on defense over last season.  If the points come, they will come late and after the game has been decided.
Joey’s Pick: OSU 52, ULL 20

East Central at Incarnate Word
UIW got the better of the Tigers last season in Ada.  And the bulk of the points for the Cardinals came in the fourth quarter.
Coach Tim McCarty has a team in this year’s squad that has momentum from the latter part of 2010 to build on.  East Central needs to have some production on the ground, but if it gets that, it won’t wilt in the fourth.
ECU repays Incarnate Word for the home loss.
Joey’s Pick: ECU 24, UIW 21

Northeastern State at Texas-San Antonio
It was a big win for Northeastern last Saturday.  A shutout is big whenever you can get it.  NSU alum and UTSA head coach Larry Coker won’t let that happen to his team in the program’s first ever game.
It will be a great experience for the Riverhawks to play in the Alamo Dome, but this Div. I (FCS) team will give Northeastern State a few more things to think about that Bacone did.  Although the game probably stays close, the Roadrunners will hang on for the win, to the delight of an excited San Antonio crowd.
Joey’s Pick: UTSA 30, NSU 28

Missouri S&T at Panhandle State
Panhandle State takes the field on Saturday with a lot to play for.  The Aggies are dedicating the game to the memory of late coach Mike Wyatt, who passed away in December.  He had been the OPSU head coach from 2007-2010.  With the return to health of running back Darryl Brister and the emotions that this game will bring, Missouri S&T is going to be in trouble in Goodwell.
Joey’s Pick: OPSU 28, MS&T 17

Southwest Baptist at Bacone
For the second consecutive week, the Warriors will have to face a D-II opponent.  This game doesn’t carry the same feel of one against a team NSU in which Tahlequah and Muskogee are close to each other.  This is just a bigger opponent.
Bacone will struggle to get on the board again this week.
Joey’s Pick: SBU 52, BC 7

Langston at Arkansas-Pine Bluff
The game is billed as the Delta Classic 4 Literacy and there is a lot of excitement going on in Pine Bluff all weekend long surrounding a cause.  For the Langston Lions, this is the first of (way too) many road games against tough opponents. UALR has just a little too much in the tank.
Joey’s Pick: UALR 35, LU 21

Kansas Wesleyan at Southern Nazarene
Well, I picked SNU to have a great season.  In fact, it’s supposed to be the best season in school history.  The Coyotes present a huge roadblock to that in Week One.  KWU is coming off a good season, just like the Crimson Storm.  But this game is in Bethany and that will make all the difference this week.
Southern Nazarene defends the home field in the opener, barely.
Joey’s Pick: SNU 28, KWU 27