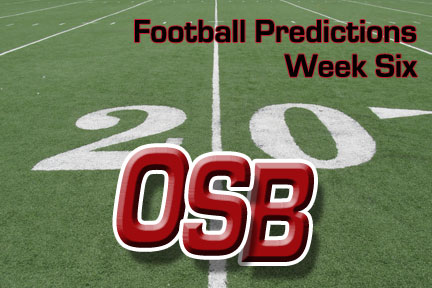 Central’s win in Ada kept me from having a perfect week and Southwestern’s last second field goal gave Matt a loss, too.
This weekend’s slate is highlighted by the Red River Rivalry.  Need we say more?
Well, yes, yes we do.  Don’t forget about the huge game in Alva with the winner of SNU and NWOSU having huge momentum to win the CSFL.
Last week:  Joey > 5-1; Matt > 2-1
Overall: Joey > 36-9; Matt > 11-4

No. 3 Oklahoma vs. No. 11 Texas
OU wins big in this one.  They probably won’t put it out of reach until the second half but Bob Stoops isn’t shy about pouring it on in this one if he can.  I believe he can.
Matt’s Pick: OU 55, UT 24
The main concern for the Sooners should be making the adjustments for the two quarterbacks the Longhorns will send out there.  This should be done by halftime.  The Sooners will put together highlights that Texas won’t want to play on the Longhorn Network.
Joey’s Pick: OU 44, UT 27

Kansas at No. 6 Oklahoma St.
OSU will dominate at home.  KU actually looked pretty good last week at home.  Once Texas Tech woke up it didn’t take long for them to run over the Jayhawks.  Look for more of the same this week.
Matt’s Pick: OSU 45, KU 13
This series is actually tied at 29-29-3 all-time.  The Cowboys have had a lead in the series only once, in 1989.  The Pokes will match that on Saturday going away.  There is simply too much offensive power going against the worst scoring defense in Division I.
Joey’s Pick: OSU 63, KU 20

Central at Cal Poly-San Luis Obispo
Mustangs vs. Bronchos.  Generally, mustangs are little faster.  This should hold true on Saturday.  Expect Cal Poly to put up a lot of points as UCO adjusts to the two-time-zone difference.  Oh, and Cal Poly is also a D-I FCS team.  Ah, the challenges of an independent schedule…
Joey’s Pick: Cal Poly-SLO 56, UCO 16

Southwestern at East Central
Having watched these teams over the last two weeks, I can say it’s tough to give an edge to either one.  Both are having pretty good seasons.  Both have quality quarterbacks with good players in the skill positions.  I’ll give a slight edge to the SWOSU defense.  If ECU turns the ball over, it’s the Bulldogs’ game to win.
Joey’s Pick: SWOSU 30, ECU 26

Northeastern at Southeastern
This one could go either way.  It will be a tough game but Southeastern wins this one at home in a close game.
Matt’s Pick: SOSU 28, NSU 24

Panhandle St. at Langston
The Aggies travel to Langston to play a Lions’ team that is at home for the first time this season.  There will be a crowd there ready to see its boys do well.  They’ll be in for a treat.  This offense will be ready to go.  OPSU is the only Oklahoma school yet to crack the win column, but it just won’t happen this week.
Joey’s Pick: LU 41, OPSU 31

Southwestern Assemblies of God at Bacone
SAGU is 3-2 with a schedule that has been that difficult to date.  The Warriors have played some tougher competition.  Maybe that will work to their advantage in Muskogee.  Maybe not.
Joey’s Pick: SAGU 20, BC 19

No. 10 Southern Nazarene at Northwestern
Before the season started, this was possibly the biggest game on either team’s schedule.  SNU has done its part to live up to the billing; NWOSU not so much.  The Rangers are going to have to match points with the Crimson Storm and it doesn’t look like the SNU defense is going to bend or break that much.
Joey’s Pick: SNU 42, NWOSU 21