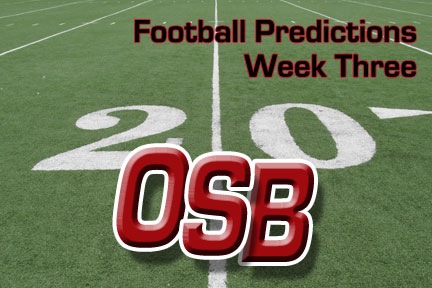 It was another decent week of picks for OSB last week.  I’m staying right at .700 and Matthew, well, he’s just got to step out of the box.  And seriously, I don’t think anyone saw Langston’s fantastic start coming.  This week could be really big for the Lions.  And don’t forget the Big Three with Oklahoma on prime time and OSU and Tulsa playing a game that will go into the next day.
Last week:  Joey > 7-3; Matt > 2-1
Overall: Joey > 14-6; Matt > 4-1

Oklahoma at Florida St.
I think this will be a close one.  OU typically doesn’t play well on the road at night.  The difference maker is Landry Jones.  If he plays up to his ability and doesn’t get rattled the Sooners win.  If he gets rattled this could get ugly.
Matt’s Pick: OU 42, FSU 38
It seems that Sooner Nation is very uncomfortable about this matchup.  And why not?  OU hasn’t been able to perform well on the road recently.  But this will likely change today.  The Sooners will get the offense they need.  Expect lesser known names to come light in this one as Oklahoma more than covers the spread.
Joey’s Pick: OU 37, FSU 27

Oklahoma St. at Tulsa
Tulsa keeps it closer than the experts think.  I don’t know how much of a home field advantage it will be for the Golden Hurricane.  I expect to see a lot of Orange in Tulsa on Saturday night.
Matt’s Pick: OSU 45, TU 35
Asdf
Joey’s Pick: OSU 49, TU 20

Central at Angelo St.
The rough start for Central doesn’t get much easier when they go to San Angelo, Texas, for their third straight road game.  The Bronchos will need all they can get from Birmingham to beat the Rams.
Joey’s Pick: ASU 34, UCO 29

Northeastern State at East Central
It was a brutal road game for NSU last week in Nebraska as the Riverhawks squared off against future MIAA rival Kearney.  Meanwhile suffered a tough loss against Ouchita Baptist.  Something will give today and I’m going to go with the home team.
Joey’s Pick: ECU 31, NSU 28

Eastern New Mexico at Panhandle St.
Each team in this one is 0-2 and looking to get that first win.  OPSU is at home, but the Aggies seem to be struggling on defense.  That will be bad if the Greyhound offense finds a rhythm.
Joey’s Pick: ENMU 41, OPSU 24

Southwestern at Henderson St.
The good news for the Bulldogs is no trips to Texas this year.  The bad news is that the first trip to Arkansas comes against a tough Henderson State team.  The Bulldogs’ defense continues to do well; it is good to have play big today.
Joey’s Pick: HSU 41, SWOSU 24

Haskell Indian at Bacone
Back at home this Saturday, the Warriors get a chance to prove what they can do.  Last week’s one-point loss on a neutral field had to be tough.  Bacone will pick up their first win today.
Joey’s Pick: BC 28, HINU 21

Langston at Missouri Western
The Lions have shocked many people with the two wins on the road against NCAA foes to open 2011.  I don’t want to pick against them again because I was wrong the first two times.  But I’m going to.  Sorry Coach Joseph.  I think the Griffons are the best of the teams Langston has seen so far and are home for their third straight in front of a big crowd in St. Joseph.
Joey’s Pick: MWSU 35, LU 16

Northwestern at South Dakota
Now this is a road trip!  South Dakota is even giving away free tickets to the first 50 Northwestern fans to show up a Will Call.  The Rangers will win games this season, but they will have to wait another week.
Joey’s Pick: USD 35, NWOSU 21

Friends at Southern NazareneI don’t care what team it is right now – that team should not want come to Bethany.  The Friends Falcons have other games on the schedule they can win.  This is one of them.
Joey’s Pick: SNU 49, FU 17