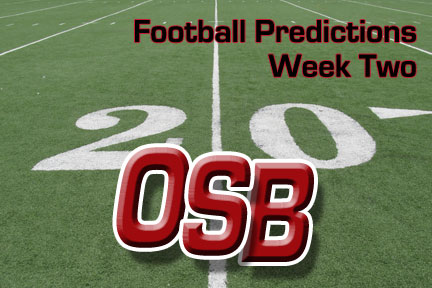 Well, I was 7-3 in Week One and Matthew went 2-0.  He’s going to have to step out a little farther on that limb.
Only one game is on the slate for tonight and you can watch this one on ESPN at 7 p.m.

Arizona at Oklahoma State
These two teams played last year in the Alamo Bowl and the Cowboys won easily 36-10.  In Stillwater the Cowboys should be able to put at least one more score on the board.  Cowboys take it to the Wildcats in Stillwater.  Could this be a sign of things to come?  These two could be seeing a lot more of each other in the Pac-16 East.
Matt’s Pick: OSU 43, UA 17
It’s a rare thing when two teams play twice in a three-game stretch, but this rematch of the 2010 Alamo Bowl gives us just that.  And it’s a Thursday game at that.
Nick Foles is a good quarterback, but Brandon Weeden is just better.  And Weeden has more in the stables at Boone Pickens Stadium to throw to, as long he throws it to guys who wear the same color jersey.  And while we’re on the subject of jerseys… Nevermind – that’s another post.
Neither team will score as much as it did last weekend, but that still leaves OSU with more points to work with.
Joey’s Pick: OSU 45, UA 30

Tulsa at Tulane
The Golden Hurricane gets a break this week before facing two more top ten teams in the first 4 weeks of the season.  Tulsa wins this one but it’s going to be close.  Kinne needs to find some targets at wide receiver but he’ll still be able to win this one with his feet.
Matt’s Pick: Tulsa 38, Tulane 34
Tulane is coming off a good win and Tulsa is coming off a big loss.  This is the Golden Hurricane’s best chance for a win in September.  But don’t think that fact is lost on Tulane.  They see this as a conference game and a chance to get on the road to win Conference USA, not just a stepping-stone for Tulsa.
Still, Tulsa has more firepower in this one and Tulane has more youth.  I like what Tulsa brings.
Joey’s Pick: Tulsa 42, Tulane 21

Central at Southeastern
UCO looks to avenge last years 56-55 overtime thriller.  This one may turn into a track meet unless one of these teams can put together some solid defense.  UCO’s Sharp went 41-71 setting the school record for completions and pass attempts last week against UNA.  Look for more of the same this week.  Should be a fun game to watch if you like offense.
Matt’s Pick: UCO 52, SOSU 48

East Central at Ouachita Baptist
East Central goes on the road again and this week’s opponent is even tougher.  OBU’s version of the Tigers is coming off a solid season and is planning to build on momentum.  This is the season opener for Ouachita.
ECU’s senior QB Tyler Vanderzee will likely need to be more productive through the air on Saturday and ECU’s Tigers must continue to build up the ground game.
Joey’s Pick: OBU 38, ECU 24

Northeastern State at No. 13 Nebraska-Kearney
The roller coaster ride that is the NSU Independent schedule doesn’t get any easier this week with a trip to play the No. 13 Lopers.  This one is also a matchup of future MIAA rivals, who will see each other again in 2014.  NSU has already left the Lone Star Conference and UNK is in its final season in the RMAC.
NSU needs to produce a few more rushing yards and UNK is coming off a blowout of Wayne State complete with 700 yards of total offense.  Trends continue this week.
Joey’s Pick: UNK 45, NSU 27

Panhandle State at New Mexico Highlands
It’s tough to tell how things will go this season for the Aggies based just on last week’s game.  I’m sticking with my pick that OPSU will have a second consecutive winning season.  For now.
Joey’s Pick: OPSU 37, NMHU 20

Southern Arkansas at Southwestern
The Bulldogs play their first game in a new conference against an opponent they’ve never seen before in SAU.  Southwestern is coming off a good win; don’t be fooled by the score.  They’ll be facing a Mulerider team that was beaten soundly last week.  If Stenta stays steady and the defense continues to look good, SWOSU will be looking at 2-0.
Joey’s Pick: SWOSU 35, SAU 28

Bacone at Sul Ross State
The good news for Bacone is that this week’s opponent isn’t D-II.  The bad news is that D-III is still a level or so above NAIA.  Bacone and Sul Ross State will meet somewhere in the middle (although BC has to travel about two-thirds of the distance) in Sweetwater, Texas, for a game at a neutral site.  The Warrior offense needs to get some rest on the bus or it could be a long night.
Joey’s Pick: SRSU 28, BC 21

Langston at Tuskegee
Another week, another road trip.  But the Langston Lions got the better of the UAPB Lions last Saturday on the road and are 1-0 on the young season (and my pick was off).  This week’s game will be the first this year for Tuskegee and the Tigers are coming off a strong 2010.  If Langston can pull off another upset of a bigger school on the road, it will definitely get some attention.  But I’m not sure just yet.
Joey’s Pick: TU 41, LU 24

Northwestern at No. 21 Colorado State-Pueblo
The Thunderwolves (yes, Thunderwolves) are coming off a huge win and upset of then-No. 19 West Texas A&M.  And for Northwestern, it’s the second week in a row in which they are facing a D-II opponent.  For a school that the NCAA denied (at least for now) the opportunity to be a D-II school, they sure are having to face that level of competition.
The Rangers are on the road and have to know that this too shall pass.
Joey’s Pick: CSU-Pueblo 37, NWOSU 20

Haskell Indian Nations at Southern Nazarene
SNU’s schedule becomes a little easier for a while before the CSFL slate.  Haskell has allowed at least 40 points in its first two games (losses) and the Crimson Storm should put up at least that many on Saturday.
Joey’s Pick: SNU 59, HINU 20