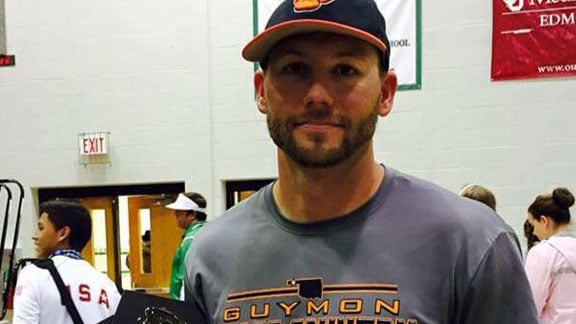 OPSU alumni have a way of affecting local communities in amazing ways. Many teachers and coaches in the Oklahoma and Texas panhandles as well as southwest Kansas have OPSU as their alma mater.

OPSU prides itself on sending students out into the world with the goal of positively affecting their community in any way possible, and the school has witnessed numerous amounts of said individuals over the years. One of these heralded alumni recently made—and continues to make—an impact at Guymon Public Schools.

Coach Andy Brown attended OPSU from 2000-05 and earned a bachelor’s degree in Health and Physical Education. While at OPSU, he enjoyed both the in class and athletic atmosphere OPSU provided.

“Academics were great and I felt like the teachers really took time to get to know you and wanted to see you succeed,” Brown said. 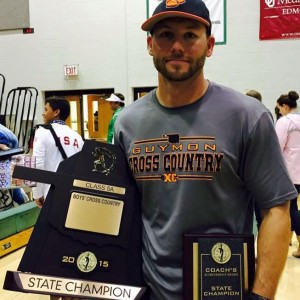 Coach Brown appreciated the small school feel of OPSU as well by stating that the smaller student to teacher ratios created a great advantage of success for students. During his time at OPSU, Coach Brown played on the men’s basketball team in 2001 and served as team manager for two more seasons.

He said that he learned a lot from Coach Terry both about basketball and about life in general. Coach Brown utilizes a principle established by Coach Terry while under his direction: students and athletes should never accept anything less than their absolute best effort at all times and all avenues of life. Coach Terry also instilled the belief that every person has a role to fill and all roles are important. Mr. Brown stated that Coach Terry and OPSU deeply impacted his life.

“I feel like those attributes I learned have helped mold my coaching style to focus on the things that I feel like are most important for our athletes to succeed,” Brown said.

Coach Brown also ran cross country for the Aggies in 2004-05, a sport which he holds close to this day.

“As a coach I am in control of the entire program from top to bottom. At one point or another I’ve been the team psychologist, nutritionist, physical therapist, and strength and conditioning coach,” Brown said.

Coach Brown also schedules all of the meets for his respective programs as well as develops and coordinates fundraisers and drives the bus to and from meets. He said that coaching requires numerous roles that all have to be performed simultaneously to ensure the success of the program and meet all of the athletes’ needs which differentiate to every individual.

Every summer, Coach Brown takes his athletes to Colorado Springs for a cross country camp to help both him and them in the various aspects of running. He said that camp has helped him and his athletes immensely on creating both off season and in season workouts. Coach also said that coaching has many more demands than running, but both sides of the coin have responsibilities to ensure success.

“Athletes have to be coachable and do the things their coach asks them to do. As an athlete the greatest challenge is how focused you are going to be in practice and what is your effort level. The rest will take care of itself,” Brown said.

Coach Brown applies all of his learned methods at Guymon Public Schools with great success.

Coach is quite proud of the success of his athletes. He has coached in Guymon for eight years, and since 2007, both the girls and boys cross country teams have qualified for the state cross country meet seven times. Last year marked the first step in the culmination of the boys cross country team as they achieved third place at the state meet. The girls’ team achieved fifth place last year, marking their most successful finish. This year, the boys’ team won the state meet as well as the regional championship.

Coach Andy Brown emulates the standard of excellence that OPSU hopes to instill in all of its alumni. He took his talents from Panhandle State and began molding a segment of the community for the better. Best of luck to Coach Brown and the Guymon Tigers’ athletic program in the future!

This story was first published in the OPSU Collegian and is republished with permission.