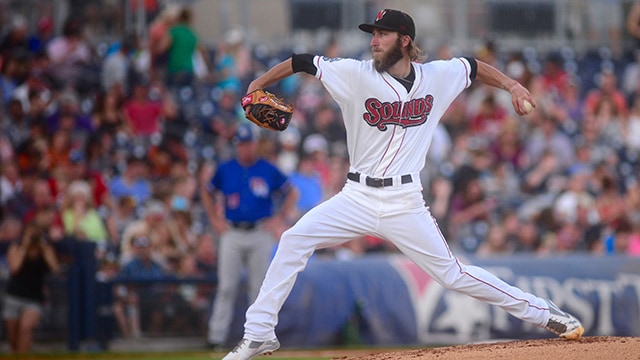 Overton, a native of Weatherford, is the organization’s No. 9 prospect and he was their second-round pick in the 2013 out of the University of Oklahoma. This season in Triple-A, Overton is 8-4 with a 3.01 ERA for the Sounds and he has not allowed an earned run in his last three outings.

“Our guys are telling us that he’s really pitching well and he’s come a long way,” Melvin said in a press release following the A’s victory on Thursday night. “He’s got a complement of pitches that gets him through righties and lefties both. We were impressed with what he did this spring. He’s just continued to develop.”

Overton played for the Sooners from 2011-13 following a four-year prep career at Weatherford High School. He was selected in the 26th round of the 2010 MLB Draft by the Boston Red Sox, but chose to attend Oklahoma instead, going 23-10 with a 2.89 ERA and 264 strikeouts and three seasons with the Sooners. Following his junior season, Overton decided to turn pro after the Athletics made him the No. 63 overall pick in the second round of the 2013 MLB Draft.

He made his minor league debut in 2014 after returning from Tommy John surgery and he spent the 2015 season playing for Double-A Midland and Advanced-A Stockton, where he went combined to go 7-6 with a 3.43 ERA in 27 games, making 25 total starts. Overton was moved to Triple-A Nashville for the start of the 2016 season and he has made 13 starts this season, including a six-inning shutout performance for the Sounds in a 10-0 victory over the Oklahoma City Dodgers at Bricktown Ballpark back on June 10.

First pitch of the game on Saturday evening is scheduled for 7:05 pm (Pacific Time) from Anaheim.