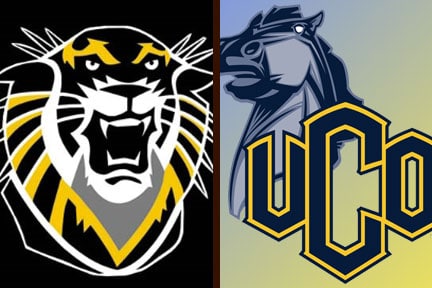 A pair of red zone giveaways, two missed points after and a blown 20-point lead was not what Central Oklahoma envisioned when it opened up its highly anticipated 2015 season. Unfortunately, the costly mistakes proved just enough to ruin the night as the visitors from Fort Hays State stunned the Bronchos in Wantland Stadium, 30-29, in the Mid-America Intercollegiate Athletic Association Game of the Week.

It was smooth sailing for UCO through the first two-thirds of the first half, jumping out to a 20-0 lead with 5:53 remaining in the half. After holding the Tigers in their first possession, the Bronchos looked poised to take the lead with less than five minutes eclipsed in the game.

Unfortunately, a fumble by the normally reliable Jake Gandara on the FHSU three-yard-line gave Fort Hays the ball. Despite the setback, UCO was able to recover and drew first blood through Chas Stallad’s four-yard pass to Josh Crockett. The ensuing PAT converted by Seth Hiddink gave him the school record for most consecutive PATs converted with 50 to his name.

The Bronchos pressed their advantage after Fort Hays’ quarterback, Treveon Albert, fumbled on his own 24-yard line. With a short field, UCO’s Clay McKenzie racked up all 26 yards on the drive in three carries, including a long run of 21 yards, to give the home team a two-touchdown advantage. However, Hiddink would see his kick blocked by Daniel Lindsey, and the score at the end of the first quarter was 13-0.

Fort Hays forced their second fumble of the game with the Bronchos’ first possession of the second quarter as Stallard coughed the ball up on the Tigers’ one-yard line. However, it was again UCO who unlocked the defense for their third touchdown of the game, this time with a 21-yard pass from Stallard to Caden Locke who tip-toed down the line after receiving the ball in the flat and dove into the end zone to make it a three-score game.

This time, FHSU would have an answer, marching down the field with a seven play, 85-yard drive that lasted 2:05. Albert finally made the connection with Andrew Flory, a Division I transfer from Central Michigan, with a 44-yard bomb down the right side of the field.

Three plays later, Treveon found Flory again on a nine-yard pass to get Fort Hays on the board at 20-7. The Tigers would score again with just under a minute to play, this time with a 26-yard Albert connection to Shaquill Cooper to cut the lead to six points.

Seth Hiddink hit a field goal at the 8:12 mark in the third quarter to push the lead to 23-14, but Cooper broke the game open for the Tigers soon after. In a Thursday-night throwback to 2012, the last season Cooper suited up for Fort Hays, he busted a 79-yard scamper through the heart of the Bronchos defense for a career-long rushing touchdown to pull FHSU within two points.

Cooper followed that up by giving his team the lead less than three minutes later, after UCO’s third fumble of the game, when he notched his second receiving touchdown of the game with a 6-yard catch. The ensuing PAT failed, giving the Tigers a slim 27-23 advantage.

Facing their first deficit of the game, the Bronchos went to work and took back the lead in the fourth quarter via a 19-yard toss by Stallard to Connor Pulley. Tragically, Hiddink’s point-after attempt clanged off the right upright to set up late drama at Wantland. The two teams traded the ball until a long drive by the Tigers put them on the right hash mark of UCO’s two yard line with three seconds left in the game.

In what proved to be a rough night for both placekickers, it was fitting that Drew O’Brien would get to play the hero, nailing the go-ahead field goal as time expired to avenge FHSU’s season-opening loss to the Bronchos at Lewis Field Stadium last season.

Cooper was a punishing presence on the ground, accounting for 163 yards on 21 carries, nearly doubling UCO’s leading rusher McKenzie who finished with 85 yards on 15 carries, to finish with 195 all-purpose yards and three touchdowns.

Both Stallard and Albert finished with three touchdowns, but Stallard proved the more effective passer, throwing for 281 yards compared to Albert’s 163. Additionally, Stallard spread the ball to seven different receivers, finishing with three receivers with at least 60 yards receiving. Flory was the massive target for Fort Hays all night long, carving up the defense in his Division II debut to the tune of 112 yards on seven catches with one touchdown. The Tigers’ three other receivers on the night combined for just four receptions.

The Bronchos will go on the road for their second game of the season to face Missouri Western State next Saturday, Sept. 10. The Griffons are coming off a gut-wrenching 18-17 loss to Central Missouri.