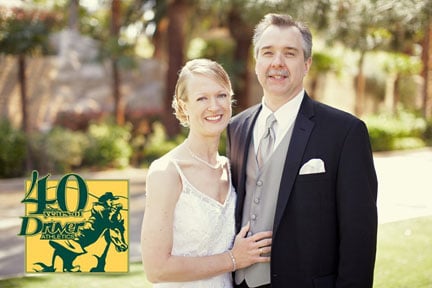 CHICKASHA – After shining on the court and in the classroom, USAO alumna Stephanie Liebl Huber continues to shine professionally.

Huber, a 1998 business graduate, played for the Drovers’ women’s basketball team from 1994 to 1998 and has gone to develop a successful law career.

Huber is one of nine former athletes to be honored at the 40th Anniversary of Athletics, scheduled on USAO’s campus Nov. 1-3. The weekend full of events is open to all former students, athletes, coaches and fans.

Huber said she believes that her four years as a student athlete at USAO had a profound effect on her career after graduation.

“Not only did balancing athletics and academics build my endurance and focus, but my business degree has helped me excel in my in-house legal career,” she said. “Working with businesses requires me to balance both the business and legal perspectives when advising the company on legal matters.”

Huber is the general counsel of Uniden America Corporation in Fort Worth, Texas. Uniden manufactures and markets wireless communication equipment.

“Though I represent a company, an inanimate object, the Lord has placed me in working situations that have allowed me to serve and support others,” Huber said. “The ‘accomplishments’ that gives me most pleasure and satisfaction in my job are the opportunities to help and support the people with whom I work. This has resulted in a lifetime network of supporters and friends, which has been a rich blessing in my life.”

Huber’s former coach, George Davidson, said he was never in any doubt that she would be able to build a successful career after college.

“There was never any question in mind,” he said. “Stephanie was an incredible girl who I always knew would be successful. She tackles everything head on with passion and commitment.”

Huber learned her sense of hard work before coming to USAO, according to Davidson.

Huber quickly became a leader for Davidson’s team both on and off the court. Her commitment and her natural leadership qualities were undeniable.

As a player, Huber was a tough inside presence who liked to do most of her work in the paint.

“She had a very good inside post game and was always strong on the boards for us,” Davidson said. “She was always someone would could rely on in tough situations during matches.”

Huber, who was from Lomega, Okla., credits her parents for helping to make the tough decision on where to attend college.

“After evaluating my options, my wise parents highly recommended I choose USAO,” Huber said. “They trusted Coach Davidson and saw that USAO created a safe environment for its students. Of course the scholarship helped their decision, too. I never regretted my decision.”

In her four years as a member of the Drover basketball team, Huber built strong bonds with many of her teammates. She said she considers those friendships as her best memory from USAO.

“My teammates became my best friends. We had very colorful personalities on the team, which made basketball fun,” she said. “I met my teammate, Rachel (McConnell Estes), at USAO our freshman year and she continues to be one of my dearest friends all these years later.”

Huber went on to earn her law degree from Oklahoma City University in 2001. She is resides in Arlington, Texas, with her husband, Joseph Huber, and is active member of Arlington Presbyterian Church.

More than happy with where her life has led her, Huber said she would not be were she is today without her USAO experience.

“My USAO experience was a true blessing from the Lord for which I am very grateful,” she said.

Huber’s profile is part of a nine story series featuring an alumnus from each of USAO’s current and former sports. Each of the alumni featured will be honored with a special award at the 40th Anniversary of Athletics, scheduled Nov. 1-3, 2012, on USAO’s campus.