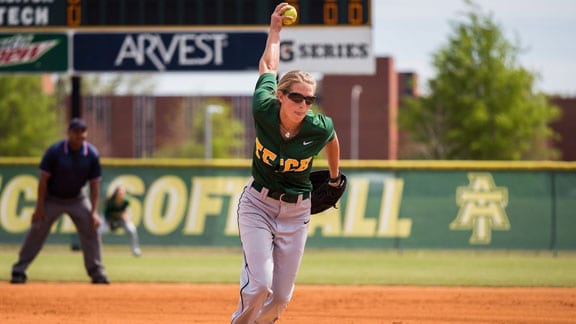 Gum, an alum of Frontier High School, threw a pair of shutouts against then-No. 23 Southern Arkansas this past weekend, the first two times that the nation’s 12th-ranked offense has been shut out this season.

“I’m honored to be named National Pitcher of the Week,” Gum said in a release. “It wouldn’t be possible without a great team behind me and our coaches leading the way all season. We’ve accomplished so much together this year and we are hoping to finish strong.”

In the opener, she gave up just one hit and struck out 14. She also accounted for her own run support, with a two-run triple in a 2-0 victory.

Gum struck out 10 in a 1-0 victory for the then-No. 5 ranked Golden Suns in game three of the series. With her 14 innings of scoreless ball last week, Gum has fired three straight shutouts and not surrendered an earned run over the last 27.2 innings.