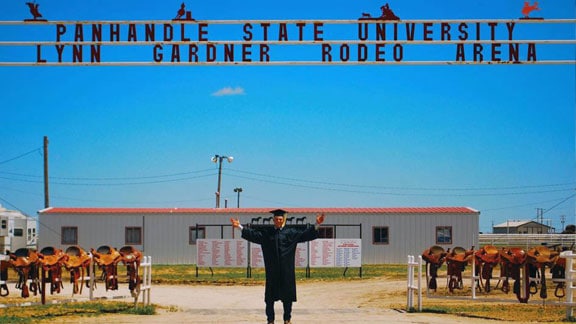 Joe Frost graduated from OPSU in May of 2015 with a degree in Agribusiness and plans to continue his career as a professional rodeo cowboy. —Courtesy photo

Goodwell — When one chapter ends, another begins. However, for Joe Frost, and many rodeo athletes, chapters within the storybook of their rodeo career often overlap. Frost double-dipped as a collegiate and professional athlete while attending Oklahoma Panhandle State University for four years and experienced great success on both platforms.

Frost, who switched his tassel in May, finished his collegiate rodeo career in Casper, Wyo. at the College National Finals Rodeo. The Utah-native is no stranger to the big stage. He was the 2014 CNFR Champion Bull Rider and the 2014 Reserve World Champion Bull Rider within the Professional Rodeo Cowboys Association. Although Frost was unable to duplicate his title inside the Casper Events Center this year, the highly-decorated cowboy qualified for the short round in the bull riding. Like the remainder of the field, Frost was unable to make a qualified ride in the championship round and finished fourth in the nation, behind younger brother, Josh.

Throughout his four-year tenure at OPSU, Frost accumulated three all-around titles and two bull riding titles within the Central Plains Region on top of his national championship. Although Frost faired very well on his own, the team atmosphere at Goodwell is an aspect he cherished.

“Winning the National [Men’s] Team Championship in 2013 was the biggest highlight for me,” Frost said. “I only wish I could have done more the last two years to help us win two more.”

As Frost moves forward with his professional career, the team aspect will remain to some degree.

“With the Wrangler Champions Challenge Tour presented by Justin Boots, the top guys are drafted and then compete on sponsors’ teams. I am currently on the Wrangler Team, and the guys you travel with become a team in a similar way,” Frost said.

Professional rodeo athletes are known for their extensive traveling schedules as they chase white lines across the country for nearly 11 months of the year. Frost’s success at the 2014 Wrangler National Finals Rodeo helped make it possible for him to travel a little more comfortably these days as he traded the minivan for a new RV.

“I used the money I won at the Wrangler National Finals Rodeo to purchase a new RV to travel in the rest of my career,” Frost said. “It will make living on the road a lot nicer and more convenient.”

Aside from the new wheels, Frost has made another addition to his professional profile with the launch of his new website, http://frostfever.com/. In addition to the Joe Frost Facebook Page, fans can check out the website to keep up with Frost as he travels to rodeos. The website also is home to an online store where fans can purchase apparel as well as links to the folks who help keep him going including Wrangler Shirts and Jeans, Justin Boots, Boyd Gaming and American Hats.

Heading into the 4th of July run of rodeos, Frost is currently ranked 15th in the PRCA with just over $27,000 accumulated. A successful “Cowboy Christmas” can be quite profitable and launch a cowboy or cowgirl in the standings.

“I had both knees operated on orthoscopically in May and they are now starting to feel really good again,” Frost said. “I’ve been working out and I’m craving it!”